Municipal election signs to start popping up in Toronto on Thursday 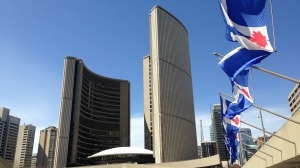 Election signs will be popping up on lawns, fences, boulevards, and utility poles throughout Toronto starting tomorrow.

As of Thursday, Sept. 29, municipal election candidates are permitted to put up and display election signs on public and private properties in the city.

The city is reminding candidates that they must obtain the consent of property owners or occupants to erect their signage, which cannot be larger than 1.2 square metres in area and higher than two metres above ground level, except on campaign offices, TTC dedicated advertising spaces, on street installations dedicated to advertising spaces, on third party advertising spaces like billboards, and when displayed indoors and on windows and balconies.

They also cannot be adjacent to a voting place, City of Toronto park, or a facility owned or operated by the city.

Lastly, they cannot be illuminated unless on advertising spaces, be attached to trees, obstruct visibility or block sightlines for pedestrians, cyclists and motorists or contain the city’s logo.

Signs are permitted to be displayed on paid advertising spaces on bus shelters, garbage and recycling containers, and street installation where a permit is obtained.

They are also allowed to be put up on Toronto Transit Commission paid advertising spaces where a permit is obtained, on third-party advertising spaces like billboards, and on vehicles or trailers if they are not parked on or adjacent to a voting place, city park, or a facility owned or operated by the city.

The city can remove signs that do not comply with the signs bylaw. Candidates will be notified and given info on when and where their confiscated signs can be retrieved. Those that aren’t retrieved could be recycled, destroyed, or disposed of by the city.

All election signs in Toronto must be taken down by October 27 or 72 hours after the election. Property owners/occupants as well as candidates are responsible for removing and disposing of election signs. Election signs should be brought to City of Toronto drop-off depots for recycling.

People should contact 311 to report election signs that flout the bylaw.