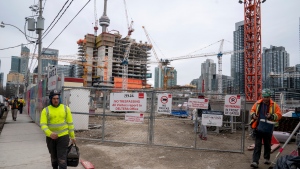 Construction workers at a site shift change in Toronto on Wednesday March 18, 2020. THE CANADIAN PRESS/Frank Gunn

TORONTO -- Some municipalities fear they are stuck in the middle of a lingering stand-off between the federal and Ontario governments over an aid package for hard-hit civic services, as an urgent request for financial help goes unanswered.

Cam Guthrie, the mayor of Guelph who also serves as the chairman of the Large Urban Mayors' Caucus of Ontario, said municipalities across the province issued the urgent plea to the province and federal government a month ago about the dire financial situations they find themselves in.

Not allowed to run deficits by law, municipalities across Ontario are laying off thousands of staff and contemplating deep service cuts if they cannot secure funding from both levels of government, Guthrie said.

"So when you look at these frontline services, like transit as an example, those things are going to have to start being even more on the chopping block because we can't afford to keep them running in the way that they are," he said.

Earlier this month, LUMCO proposed a relief plan with a focus on addressing the projected $415 million revenue loss from April to June in transit systems.

Guthrie said while the proposal was met positively by the federal and provincial governments, mayors across the province are concerned that the longer talks drag on between the two upper levels of government, the harder the recovery will be for cities and towns.

"I'm feeling municipalities are potentially caught in the middle of a provincial and federal issue that is being played out between fingers pointing back and forth," he said. "And meanwhile, the municipalities in the room are jumping up and down with their hand up in the air saying, 'We're here, we want to help."'

Last week, Toronto Mayor John Tory expressed frustration about the lack of relief for that city. He laid out a stark scenario that would see the city cut services across the board and lay off more than 19,500 staff if no aid was provided.

The city would also cut transit services by $575 million, reducing operations by 50 per cent. Toronto police would be cut by $31 million and have to lay off 500 officers, while the city's fire service would have to cut $23 million.

The city is facing at least $1.5 billion in cost pressures this year because of the pandemic, Tory said, urging federal and provincial politicians to move beyond encouraging words to civic leaders.

Mississauga Mayor Bonnie Crombie said her city has already had to make difficult decisions because of financial pressures related to COVID-19, including laying off 2,000 city staff.

Crombie estimated that the pandemic is costing her city $20 million a month.

"So if this situation were to continue, for six months, we could see ourselves in $100 million deficit," she said. "In Mississauga, that would have to be a 17 per cent (property tax) increase."

Crombie said she also worries the province and federal governments are engaged in a "stare down" over who should contribute what to the relief package.

"I think the federal government has provided a lot operating revenue funding for different organizations and individuals, as has the provincial government, but it is as though there's a contest right now about who's gonna blink first," she said.

A spokeswoman for Deputy Prime Minister Chrystia Freeland said the federal government is eager to hear from provinces and territories about how it can help municipalities.

"We are grateful for the leadership that all municipalities, very much including those in Ontario, continue to demonstrate at this immensely challenging time," Katherine Cuplinskas said in a statement.

A spokeswoman for Ontario's Municipal Affairs Minister Steve Clark said the province plans to raise the issue of municipal support during a conference call with the federal government on Thursday.

"We know that municipal revenues are impacted by the current situation, and we have joined our municipal partners in calling on the federal government for emergency funding," Julie O'Driscoll said in a statement.

Last month, the Federation of Canadian Municipalities said at least $10 billion in emergency operating funding was needed for communities across the country.