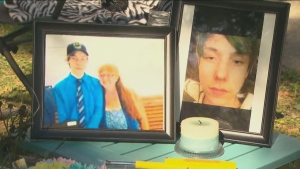 A memorial has been set up for 14-year-old Devan Selvey, who was stabbed to death outside his Hamilton high school on Monday.

A first-degree murder charge laid against one of two males accused in the murder of 14-year-old Devan Bracci-Selvey was withdrawn Friday in a Hamilton courtroom.

Bracci-Selvey was outside of Sir Winston Churchill Secondary School in Hamilton on Oct. 7, waiting for his mother to come pick up him when he was attacked by suspects, one of whom was carrying a knife.

His mother Shari-Ann told CP24 she pulled up to the front of the school and witnessed her son get stabbed to death.

A total of four teens were arrested in the hours after the incident, and two of them were released without charge.

An 18-year-old man and a 14-year-old boy were both charged with first-degree murder.

Investigators said at the time that they believed the 14-year-old suspect was the one who brandished a knife.

Neither was identified due to a publication ban in place on the 18-year-old and the Youth Criminal Justice Act protecting the identity of the minor.

On Friday, the Crown dropped the murder charge laid against the 18-year-old suspect.

He is now facing charges of assault with a weapon, possession of a prohibited weapon and administer a noxious thing, Hamilton police said.

The Crown told court that they felt there was no reasonable prospect of a conviction on the murder charge.

The charge laid against the 14-year-old remains.

A sweeping review of anti-bullying procedures is underway at the Hamilton-Wentworth School Board, as Shari-Ann Bracci-Selvey told reporters her son had frequent issues with bullies at his school that were well-documented with his teachers.

She said the bullying was sometimes so bad her son would not go to school.