MUST WATCH: Nanticoke Generating Station reduced to pile of rubble 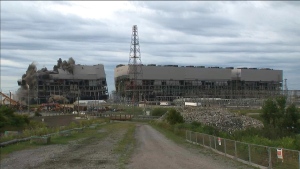 The powerhouse for the former Nanticoke Generating Station is shown being demolished on Thursday morning.

The 11-storey building that once housed the boiler units for the world’s largest coal-fired power plant has been reduced to a pile of rubble.

The powerhouse for the former Nanticoke Generating Station came tumbling down in about 30 seconds on Monday morning as part of a planned demolition of the long-shuttered site.

The demolition was weather dependent, as there was a requirement for northwest winds of at least 10 kilometres an hour. Luckily, it went off as scheduled at 8 a.m. and crews verified that the necessary wind conditions were present.

Prior to the demolition, a floating membrane was put in place along the shores of Lake Erie to prevent any dust or debris from landing in the water.

Crews also closed down road and lake access around the site, completed a perimeter check and set off a series of sirens to alert bystanders.

A non-electric shock tube was then used to detonate the charges placed inside the building, a precaution that the OPG said would help to prevent “premature detonations from lightning or radio interference.”

“It took a fairly significant engineering effort to pre weaken the boiler columns. The boiler columns are the steel structures that supported the mass that was demolished today. There were about a thousand pounds of explosives across the eight units that were demolished her this morning,” Dennis Randall, a project site manager with the OPG, told CP24.

At one point the powerhouse was part of a massive facility that provided up to 15 per cent of the province’s electricity; however it was decommissioned in 2013 as part of the then Liberal government’s efforts to eliminate the use of coal power.

In April, Ontario Power Generation finished work on a new solar facility on the site that features more than 192,000 solar panels that are capable of generating 44 megawatts of power.

It is OPG’s first ever solar power facility.

The powerhouse for the former Nanticoke Generating Station is shown being demolished on Thursday morning.