N.L. Premier Dwight Ball to step down, says he will seek a 'more private life' 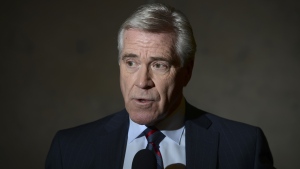 Premier of Newfoundland and Labrador, Dwight Ball talks to reporters after meeting with Prime Minister Justin Trudeau on Parliament Hill in Ottawa on November 26, 2019. THE CANADIAN PRESS/Sean Kilpatrick

ST. JOHN'S, N.L. - Newfoundland and Labrador's premier has announced he is stepping down after more than four years leading the province.

Dwight Ball said in a video released Monday that he has asked the president of the provincial Liberal party to convene a leadership process to choose a successor “at the earliest opportunity.”

Ball, who was re-elected with a minority government last spring, said he is resigning to live a “more private life” with friends and family in Deer Lake.

Ball, 63, said he will stay on as premier until a new leader is chosen and will continue to represent the Humber-Gros Morne district in the legislature until the next provincial election.

He said he decided to start the leadership process now given his government's minority status and the unpredictability of the next election date.

“Now is the time for me to make way for new leadership in my party and in my province,” said Ball, who in the video was seated at his desk, flanked by Newfoundland and Labrador and Canadian flags.

The premier said he will continue overseeing budget preparations and will prioritize protecting ratepayers from the cost overruns of the Muskrat Falls hydro dam.

His announcement Monday comes one week after a joint announcement with Ottawa that the two governments would rewrite the financial structure of the beleaguered megaproject on Labrador's Lower Churchill River.

Currently priced at $12.7 billion, the dam has come to represent one-third of the province's net debt since it was sanctioned in 2012.

The dam is set to produce more power than the province can sell, and its existing financial structure would have left electricity ratepayers on the hook to make up the difference starting in 2021.

Though last week's announcement was light on specifics of the new model that will redirect benefits of the project to ratepayers, Ball vowed again on Monday that rates would not rise above current levels.

“Our plan will work,” he said in the video.

Federal Natural Resources Minister Seamus O'Regan, who joined Ball in St. John's for last week's announcement, said in a tweet that Ball “demonstrated his doggedness, his decency, and a keen understanding of the challenges we face” during the discussions.

“He fought hard for the people of our province,” O'Regan wrote.

Ball came to power in 2015 after serving as leader of the official Opposition since 2012, and he has presided over difficult economic times in Newfoundland and Labrador.

The province entered 2020 facing a bleak financial forecast. Auditor general Julia Mullaley reported late last year that the province's net debt is higher than it's ever been and cautioned that the government “is not living within its means.”

Despite challenges, Ball had insisted that under his leadership the government would get the province's finances back on track. Ball repeated Monday that he “set out to change the course” when he became premier.

“I took on the job when our province was facing challenges that were unprecedented in our history,” he said. “We have navigated through those challenges together.”

Progressive Conservative Leader Ches Crosbie, who leads the opposition in the legislature, congratulated Ball for his service but criticized his opponent for lacking leadership, especially after what he called last week's “non-announcement” about hydro rate mitigation.

Crosbie called the resignation a “crisis,” coming at a time when lawmakers need to focus on serious issues such as the budget and rate mitigation.

“This is the wrong time for us in Newfoundland and Labrador to have a caretaker government, and that's effectively what we have. The premier is now a lame duck,” Crosbie said in a telephone interview. “We're going to drift for several more months at least.”

In his video, the premier thanked his constituents, staff, party and family, saying he looks forward to contributing to the province in other ways.