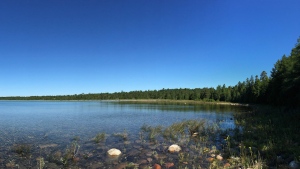 A national not-for-profit land trust says it has expanded a conservation area on a Lake Huron island that has large forests and a long stretch of undeveloped shoreline.

The Nature Conservancy of Canada says the portion of land it now protects on Cockburn Island, west of Manitoulin Island, is 107 square kilometres - twice the size of Bermuda.

It says the island has one of the largest hardwood forest ecosystems in southern Ontario, and is a vital breeding area and stopover site for migratory songbirds and waterfowl.

The NCC says the island is also home to many mammals, and has rivers and creeks that support several species.

The organization had already protected more than 60 per cent of the island and launched a campaign in March to expand the conservation area.

It plans to conduct biological surveys to learn more about the island and look at removing invasive species in the area.

“It's really a unique opportunity for conservation in the Great Lakes,” said Vince Deschamps, the NCC's program director for midwestern Ontario. “It's definitely a success story.”

Deschamps said not many people know about Cockburn island because it has only a few summer cottages and one year-round resident.

He said the NCC plans to work to preserve the many species that inhabit the area.