Nearly 1 in every 3 people tested for monkeypox in Ontario was positive: officials 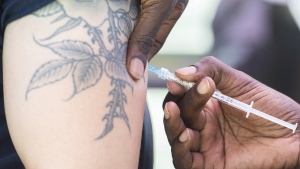 The province reported 29 new cases of monkeypox on Tuesday, with labs reporting a total positivity rate of nearly one in three since May.

The province is now aware of 478 confirmed cases, up from 449 last week.

Among confirmed cases, 75 per cent (359) are in residents of Toronto.

Fifteen individuals have required hospitalization since May, and two people required treatment in an intensive care unit.

Seven other suspected cases are still under investigation.

Public Health Ontario told CP24 on Wednesday that as of Monday, 1,636 tests for monkeypox had been completed in the province, generating a positivity rate at the time of 31.6 per cent.

There are now three confirmed cases in females, up from two last week, still representing only 0.6 per cent of all known cases.

Other areas of the province make up the remaining 25 per cent of the caseload, with Ottawa (36 cases), Middlesex-London (13 cases), Hamilton (11 cases) and Halton and Durham (9 cases each) leading the count elsewhere.

The most commonly reported symptoms continue to be rash, oral/genital lesions, fever and fatigue.

Earlier this week, Ontario Chief Medical Officer Dr. Kieran Moore said that 20,000 Ontario residents have received the Imvamune vaccine against smallpox and monkeypox so far, and that the vaccination effort was helping slow transmission of the virus.

The City of Toronto continues to host vaccination clinics aimed at the most vulnerable communities.

The U.S. Centers for Disease Control says it is aware of more than 30,000 confirmed cases of monkeypox in 88 countries around the world.

The Public Health Agency of Canada says it is aware of 957 cases of monkeypox across Canada.