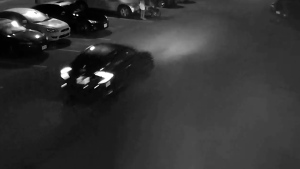 A suspect vehicle in an Aug. 1 shooting in Ajax is shown in this surveillance camera image.

Durham police have released surveillance camera footage of a suspect vehicle wanted in connection with a shooting behind an Ajax plaza that wounded six people this past summer.

The shooting took place at around 1:20 a.m. on August 1 at the rear of Dam Foods on Hardwood Avenue south of Highway 401.

Police have previously said that a “customer appreciation party” was being held at the back of the local Caribbean market at the time.

The suspected gunmen, police say, was at that party and got involved in a verbal altercation with some patrons.

He left the premises but returned hours later and opened fire, according to police.

Six people were injured as a result, including two people who were rushed to hospital in critical condition.

In a news release issued on Wednesday, police said that investigators now believe that there were “multiple shooters” at the event.

The surveillance footage released by police shows a dark coloured car driving through the parking lot and then slowing beside a crowd of people. Several people are then seen running away.

So far no suspect description have been released.

“Investigators from West Division are seeking the assistance from the public in identifying a vehicle and occupants,” police said in the news release.

A suspect vehicle in an Aug. 1 shooting in Ajax is shown in this surveillance camera image.