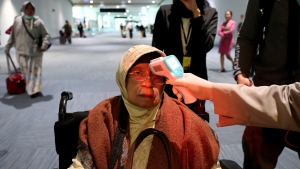 A health official scans the body temperature of a passenger as she arrives at the Soekarno-Hatta International Airport in Tangerang, Indonesia, Wednesday, Jan. 22, 2020. Indonesia is screening travelers from overseas for a new type of coronavirus as fears spread about a mysterious infectious disease after its first death reported in China. (AP Photo/Tatan Syuflana)

MONTREAL -- A deadly new virus that emerged in China is raising concerns beyond the public health sphere as experts warn about the potential economic cost of a global outbreak that is already drawing comparisons to the deadly SARS epidemic 17 years ago.

Transportation and tourism companies have seen declines in share prices amid travel warnings and restrictions from governments around the world hoping to avoid a repeat of the spread of Severe Acute Respiratory Syndrome, which cost the Canadian economy an estimated US$4 billion.

At least 17 people have died and more than 500 have been infected by the ailment called novel coronavirus, whose early cases are linked to a market in Wuhan in central China. The World Health Organization postponed until Thursday a decision on whether to declare an international emergency over the outbreak of the flu-like illness, which can cause pneumonia and other severe respiratory symptoms, including one case in the United States.

"The cost to the global economy can be quite staggering, in negative GDP terms, if this outbreak reaches epidemic proportions as until this week, the market was underestimating the potential of the flu spreading," Stephen Innes, chief Asian strategist for AxiCorp, said in a report.

The travel sector has already started to feel the hit as shares of four North American airlines that fly to China, including Air Canada, fell on Tuesday amid growing anxiety about the viral infection.

None of the airlines fly directly to Wuhan, but their Chinese partner airlines do, and some passengers transfer from a Chinese carrier to a Canadian one, offering the potential for the virus to spread here.

Shares at the three biggest U.S. cruise lines have also fallen, with Royal Caribbean Cruises Ltd. -- which boasts a major Chinese presence -- dropping more than four per cent this week.

Analyst Chris Murray of AltaCorp Capital pointed to the past for clues on the market volatility, propelled by "an unknown level of potential disruption."

"History suggests shares may be in for a rough ride," he said of airline and tourism stocks in a research note. He recalled jittery stock movements after the SARS outbreak in 2002 and 2003, as well as with H1N1 influenza in 2009 and the Ebola virus in 2014.

"These larger-scale epidemics can have a more pronounced near-term impact. However, once a better understanding of the magnitude of the spread and severity was understood, stock prices recovered quite sharply in all three cases within months," he said.

The extent of the epidemic so far still falls well short of the spread of SARS, a virus from the same family as coronavirus that spread from China to more than two dozen countries -- including Canada.

SARS infected more than 8,000 people worldwide, killing close to 800, according to the World Health Organization. The disease sickened about 438 Canadian patients and caused 44 deaths in the Toronto area.

SARS cost the country US$4 billion and about 28,000 jobs, according to a 2014 report by Kai Ostwald, an assistant professor at the University of British Columbia's School of Public Policy and Global Affairs.

The damage came in large part from fear-based shifts in consumer behaviour rather than higher medical expenditures, Ostwald said.

"Specifically, fear of contagion prompted widespread aversion behaviour, in which people significantly reduced activities that put them in close proximity with others. This included not only things like flying and eating in restaurants, but also activities like workplace and school attendance," he wrote.

Hotels in the Greater Toronto Area, where the Canadian outbreak was centred, lost out on an estimated $39 million in revenues in April 2003 alone, according to the Canadian Tourism Commission.

Less traffic through the city's Pearson airport spawned some $220 million in losses, according to the Conference Board of Canada. More than 800 bus tours were cancelled by the end of April -- when the World Health Organization issued a one-week travel advisory for Toronto -- with an economic loss of up to $6 million.

Air Canada wouldn't speculate on the potential impact from coronavirus. In 2003 financial reports, it said passenger revenues decreased in part due to lower demand for travel resulting from the SARS crisis, particularly in the Pacific market that "was severely adversely impacted with large reductions in traffic and capacity."

Canadian authorities are now more prepared for SARS-like viruses, he said. But he also noted that the number of annual visitors to Canada from China has shot up, growing by a factor of 10 since 2000 to 757,000 travellers in 2018, according to Statistics Canada.

On Tuesday a U.S. citizen who had recently returned from China was diagnosed in the Seattle area, making the United States the sixth country to report a case, following China, Thailand, Japan, Taiwan and South Korea.

While the ordinary flu kills hundreds of thousands of people each year, uncertainty over how deadly and transmittable the new virus may be has amplified concerns, especially on the cusp of the annual mass travel surrounding lunar New Year, which begins this week.

Dr. Theresa Tam, Canada's chief public health officer, says she immediately contacted her counterparts at the provincial level upon hearing of three potential cases of the new virus that were investigated and ruled out.

"They in turn have notified their front line in terms of their health system," Tam said on a call with reporters Monday. Ontario's Chief Medical Officer has said hospitals are already employing protocols established during the SARS epidemic in anticipation of possible cases.

Canadians are at low risk of contracting the illness, Tam said. Other precautionary measures have been introduced by the Public Health Agency of Canada, including screening processes at airports in Vancouver, Toronto and Montreal to identify passengers travelling from Wuhan for assessment by Canada Border Services Agency officers, including a possible temperature check.

Tour operators are alert, but aren't battening down the hatches just yet.