No injuries after fire at Brampton Canadian Tire garden centre 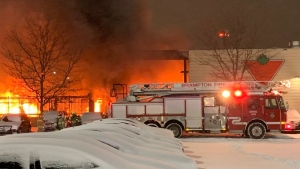 Crews are on scene of a massive fire at a Brampton Canadian Tire. (Twitter/ Brampton Fire and Emergency Services)

No injuries were reported after a fire broke out in the garden centre of a Canadian Tire in Brampton early this morning.

Heavy smoke and flames could be seen coming from the store, located near McLaughlin Road and Bovaird Drive, shortly before 4:30 a.m.

When Brampton Fire and Emergency Services arrived, crews immediately began offensive operations both inside and outside the structure.

"The fire did not extend significantly to the building. Members were able to stop it. There is a small amount of smoke that’s been in there and a little bit of water damage," Platoon Chief Ron Rolfe told CP24 at the scene. "The fire has been knocked down at this point."

Officials have not provided an estimate on damage.

The cause of the fire is not yet known but an investigator is currently on scene.

Bovaird Drive has been shut down from Van Kirk Drive to McLaughlin Road.

Crews are on scene of a massive fire at a Brampton Canadian Tire. (Twitter/ Brampton Fire and Emergency Services)