No injuries after large fire at Hamilton steel plant 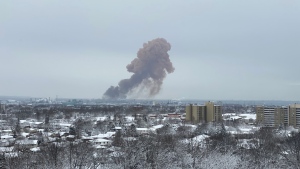 Smoke rises after an explosion in Hamilton on Dec. 25, 2020. (Twitter/@StachSean)

A large explosion and ensuing fire was seen across the Hamilton area on Friday morning after an incident involving a steel blast furnace in the city’s waterfront industrial zone.

Hamilton firefighters said they were originally called to 300 Wilcox Street, north of Burlington Street, for a fire at 11:13 a.m.

ArcelorMittal Dofasco later said the fire was a result of a “slag pit eruption” that occurred at its No. 4 Blast Furnace.

“Thankfully there are no injuries,” a spokesperson for the company said.

Hamilton fire crews were on stand-by to provide aerial support if needed but cleared the scene after noon.

“The event caused a significant air emission. Ministry of Environment, Conservation and Parks have been alerted,” the ArcelorMittal Dofasco spokesperson said.

Twitter users from Stoney Creek, Burlington and the rest of Hamilton reported hearing the blast, as well as sights of thick plumes of brown and black smoke.

hoping everyone is safe ❤️ pic.twitter.com/WGBKFysFhe

Smoke rises after an explosion in Hamilton on Dec. 25, 2020. (Twitter/@StachSean)