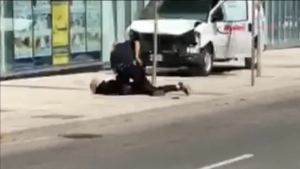 The case of a man accused of killing 10 people and injuring 16 others by ramming into them with a van across a stretch of North York last April will be heard by a judge alone in Toronto.

Alek Minassian, of Richmond Hill, has been charged with 10 counts of first-degree murder and 16 counts of attempted murder in the Yonge Street attack that took place on April 23, 2018.

His lawyer, Boris Bytensky, said it’s unusual for homicide cases to be heard by a judge alone, but he and the Crown agreed to it.

“Everybody felt that the best way to proceed in this case was to have a judge alone trial,” he said.

The decision Wednesday means an earlier motion to have to trial held elsewhere in Ontario has been withdrawn, as it concerned the impartiality of a potential body of jurors considering the immense media attention this incident garnered.

Bytensky said his client was present in court Wednesday. He declined to comment on his general state after more than a year spent in pre-trial custody at Toronto South Detention Centre.

“He’s aware of the decision that was made. He’s looking forward to going ahead with this trial,” Bytensky said.

The trial is scheduled to begin in February 2020 and will be heard by Justice Anne Molloy.