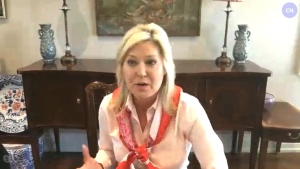 Mississauga Mayor Bonnie Crombie says that the COVID-19 situation in her community is not “stable yet” and that Premier Doug Ford’s newfound willingness to consider a regional approach to reopening the province makes sense.

Ford had previously resisted calls to allow communities with a lower number of COVID-19 cases to reopen first but at a news conference on Friday he said that it is an approach that he is now willing to consider.

The about-face came after Ontario’s 34 medical officers of health wrote an open letter; calling for a more regional approach to Ontario’s reopening.

Data also surfaced this week suggesting that more than three-quarters of all new cases are now in the GTA.

“For some time I have been saying that we need a regional approach, a more phased in approach and I am delighted that the premier has heard the message,” Crombie told CP24 on Saturday morning. “Peel (Region) accounts for one-third of all new cases even though we are 10 per cent of the population. So we are not stable yet here in Peel and our numbers have not started to decline. In fact we are seeing increase in cases.”

There have been a total of 4,496 cases of COVID-19 in Peel Region since the outset of the pandemic and dozens of new cases continue to be confirmed each day.

Crombie said that public health officials in the region have done an analysis and determined that new cases in “household clusters and workplaces, including food processing plants, warehouses and delivering companies” are driving the continued rise in inefections in the region.

She said that while she is “very pleased” that some things have opened up, Peel Region just isn’t ready for the wider reopening that will occur when it moves to Stage Two of the Ford government’s three-stage reopening plan.

“We have a little bit of a hotspot in certain parts of Peel. That is why we have asked that we slow this down and take a regional approach,” she said.

The province’s initial framework for restarting the economy called for a two-to-four week evaluation period before each stage. Tuesday, it should be noted, will mark two weeks since the province entered stage one of the plan.