Notes from the campaign trail: Affordability top of mind for parties 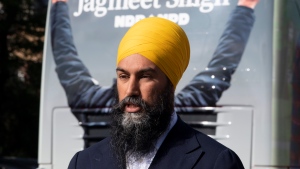 NDP leader Jagmeet Singh speaks to the media beside the campaign bus during a stop in Montreal, Monday, September 16, 2019. THE CANADIAN PRESS/Adrian Wyld

An online poll from Abacus Data this spring told us something many Canadians know. More than one in four of us are kept up at night with worries about the bills we face and other financial concerns. Climate change and the environment only keep eight per cent of Canadians tossing and turning in the middle of the night. The poll also revealed that more than half, 57 per cent, “rank an issue tied to the cost of living, wages or taxes as their top issue.”

That brings me to the word of the campaign so far, affordability. On Monday Liberal leaderJustin Trudeau went to Waterloo and used the word multiple times talking about a Liberal child care commitment. The promise today is the new program will benefit one million Canadians.

While Trudeau was making his announcement Elizabeth May was in Toronto unveiling the Green Party platform and making sure everyone heard loud and clear the Green Party’s many promises  to make life more affordable” and “make things better for Canadians.”

In Quebec, NDP leader Jagmeet Singh also worked the word into his event, saying housing is “unaffordable” for many Canadians. Singh is making expensive policy proposals trying to get the attention of voters.

Many issue polls put climate change and the environment as the number one concern for Canadians. The leaders all give a nod to that issue but so far each has spent much more time on the pocket book concerns of Canadians. The “affordable” theme is central to the party ads as well. Many of the online ads hit on issues affecting voters’ pocket books.

What all the parties gloss over is who will pay to put more money in your pocket. With Canada’s debt climbing by the minute all those affordability promises might be unaffordable without revenue increases. Right now the Canadian economy is ticking along quite nicely and that in itself does mean higher revenues. But any economic pullback will put pressure on delivering affordability promises for Canadians.

The Leaders Debate Commission looked at its criteria for inclusion in the TV debates on October 7 (English) and October 10 (French) and decided that the People’s Party of Canada’s leader, Maxime Bernier, can take part. That will put six leaders on the stage. The head of the commission, former governor-general  David Johnson said, "You have satisfied me that you intend to field candidates in 90 per cent of ridings and, based on recent political context, public opinion polls and previous general election results, I consider that more than one candidate of your party has a legitimate chance to be elected."

Bernier is running for re-election in the Quebec riding of Beauce. He first won that riding in 2006 as a Conservative. In 2015 he won with almost 60per cent of the vote. However this year he will be running against a new Conservative candidate as well as five other candidates. Last week the Rhinoceros Party put in nomination papers for another candidate with the name, Maxime Bernier.

Bernier narrowly lost the Conservative leadership race to Andrew Scheer. On CP24 last week Bernier said there is no climate emergency and called for a significant reduction in the number of immigrants coming to Canada. Giving voice to those views will complicate the efforts of the other leaders to get their messages across.