Notes From The Campaign Trail: Are Canadians paying attention yet? 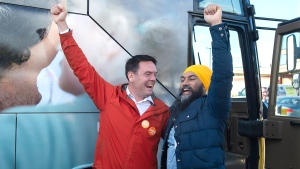 With 24 days to go, the election dial hasn’t changed much. The polls showed a tight race before the election was called. Today the national polls still have the Liberals and Conservatives in a tie. So what gives? One possibility is that Canadians aren’t paying much attention yet.

Brian Topp worked on NDP federal campaigns when Jack Layton led the party. He said today we’re still in the first period in this election.  “The second period will be the TV debates,” Topp said. The third period will start with Thanksgiving Day weekend get-togethers and roll on to voting day on October 21.

If you buy Topp’s hockey analogy the first period still has ten days to go. That key English TV debate happens the evening of October 7. There will be one or two possible highlights before we get to the debate. Liberal leader Justin Trudeau told reporters in Montreal today the Liberal costed platform will be released next week before the first French language debate. The full Conservative platform will probably be released before the big debates as well.

The pollsters will be watching to see if Friday’s climate strike marches have an impact on voter intentions. Trudeau went to Montreal to take part in the protest. For Trudeau walking in the march with his family came with risks. Some activists did shout at Trudeau, one calling him a “climate criminal” and others attacking Trudeau’s decision to buy the Trans Mountain pipeline. Many of the marchers don’t think the Liberal government did enough to fight climate change over the last four years. Buying the pipeline is widely criticized by climate activists. Today Trudeau repeated a few times that the profits from the pipeline will be used to combat climate change.  Trudeau also promised that if elected the Liberals would plant two billion trees.

In his remarks to reporters Trudeau made Conservative leader, Andrew Scheer, his main target. Trudeau said the Conservative Party, “refuses to admit that climate change is even a problem. Andrew Scheer is choosing to hide today, instead of participating in climate marches. But it’s no surprise that he’s not showing up to the climate march, because he’s not showing up for the fight against climate change. That’s the choice facing Canadians right now.”

NDP leader Jagmeet Singh spent Friday on the west coast. Singh needs to shake lose disaffected Liberal voters. The NDP believe Trudeau is vulnerable on the climate issue.  While Trudeau zeroed in on Scheer not even mentioning Singh the NDP leader did the opposite. Singh announced an NDP promise to protect the B.C. coastline. In his session with reporters Singh repeatedly took on Trudeau’s decision to buy the pipeline. He also tweeted, “Trees won’t hide the pipeline you bought.” Later Singh took part in a climate strike march in Victoria.

So how did the Conservatives position Andrew Scheer today? Well he spent most of the day in the air flying from Montreal to Vancouver. The Conservative announcement didn’t touch on climate change directly. Instead Scheer repeated that the Liberal government has not delivered on its promise to launch infrastructure projects. That’s very true too.  Scheer said a Conservative government will get shovels in the ground and infrastructure projects built.

Reporters wanted to know about Scheer’s decision to take a pass on going to a climate strike march. Asked directly if he would take part in any of the eight demonstrations in the Vancouver area Scheer chose to deflect the question and repeat his proposals to build bridges and subways calling them “concrete actions.” And Scheer said Trudeau’s participation in the Montreal march was ironic because “Justin Trudeau is protesting his own government’s failure.”

Hundreds of thousands of young Canadians, many with their parents, spent the day engaged in the political process. Over the weekend many of them will take the time to measure how Canada’s leaders responded to their climate strike. Will that move the election dial?