Notes from the campaign trail: Female voters a key target for party leaders 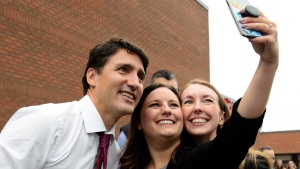 “As long as I am Prime Minister of this country no man or no woman is going to be allowed to suffer – deficit or no deficit.”

Conservative Prime Minister Diefenbaker made that promise after winning a huge win in the 1958 federal election. Less than a full week into the 2019 campaign all the parties are floating expensive promises down on Canadians like confetti. All the leaders are echoing Diefenbaker that no man or woman in Canada should suffer and are seemingly oblivious to the ongoing increases in the national deficit. Figures released Tuesday by the government show Canada ran a $14 billion deficit in 2018-19. A quick look back to 1958 shows the deficit then was $821 million.

Today, in St. John’s, the Liberals rolled out a generous plan to increase the Canada Child Benefit. And Justin Trudeau promised a Liberal government will build a national system of guaranteed paid family leave.

In Ottawa, Jagmeet Singh spent another day focusing on the big NDP housing promise to build 500,000 new units over 10 years. Singh dodged the question about the impact of his many expensive promises on the deficit, saying budget concerns can wait and the NDP’s priority is “investing in some of the crises that people are going through."

And not to be out done in the promise department was Andrew Scheer, who went to a hair salon in Winnipeg and committed a Conservative government to increasing RESP contributions. The Conservative plan would increase the annual grant by $250. At all three events the leaders tried to get the attention of parents and especially moms.

CTV pollster Nik Nanos says female voters are a key target in the election and are vitally important for the Liberals if they want to win a majority government. Over the past few days, the Nanos tracking poll for CTV News suggests women are softening in their support for the Liberals. “The Liberals double-digit advantage among women voters has been on the decline. That double digit is now a single digit,” Nanos said in a CP24 interview Tuesday. Nanos says the Conservatives are trending in “a positive direction” partly because women right now are moving into the Conservative column.

John Capobianco, a Conservative strategist, points out that women “have always had a significant role in Canadian elections.” Kim Wright, an NDP strategist, predicts that during the campaign “all parties will play to and court the women vote.” In a close campaign, and right now this is a very close race, winning over the support of women with programs geared to their interests and needs is what is driving the announcements from all the parties.

The Liberals will have Trudeau in the Maritimes on Wednesday. Andrew Scheer will bring the Conservative message to Ontario, and Jagmeet Singh will stay on the NDP bus overnighting in Sudbury, Ontario.