Notes from the campaign trail: Jockeying for the shot of the day 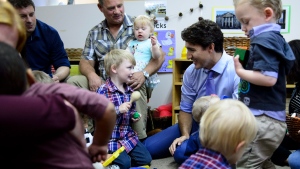 The Liberal war room must be very happy. Tuesday’s photo op putting Liberal leader Justin Trudeau on the floor with a room full of children was used in newspapers and TV newscasts across the country.

The media coverage was all over the parties’ various promises to help families. Most of the reporting pointed out how important it is going to be to get the attention and vote of young parents. You’ll recall the NDP added some details to its massive housing commitment to keep that front and centre.  The Conservatives added money to families making RESP contributions.  The Liberals rang in with a child care promise.

All of that got prominent coverage but that video and picture of a smiling Trudeau playing with kids was the photo of the day that got used the most. In many newspapers it was the only photo used from Tuesday’s campaigning.

Week One’s campaign routine is rolling out just as political observers expected. It starts with an early morning photo op pegged to an announcement from the leader. At this first stop, time is made to take questions from reporters. Then leaders move on to other ridings for brief campaign stops and short photo opportunities, usually with no chance for reporters to ask more questions. Some days the campaign will have an evening rally or, more often, hop on planes or buses to be in position and ready to do it all again the next day.

The campaigns jockey with each other to get their leaders to the microphone first. On Wednesday that was the NDP’s Jagmeet Singh. He toured a dental facility in Sudbury. The NDP promise of the day was free basic dental care for Canadians earning less than $70,000 a year and subsidized dental care for families making $70,000– $90,000.

Liberal leader Justin Trudeau was up next, with a commitment to put more money in the pockets of seniors. Trudeau let his session with reporters in New Brunswick stretch a bit before heading to his next campaign stop.

A couple of weeks ago I predicted the Liberal government’s new initiative to allow the Parliamentary Budget Office (PBO) to review the price tag on policy offers by the parties would be a factor in the campaign. The Conservatives, NDP and Green Party have all used the PBO. It is the Liberal Party that, so far, has not availed itself of the PBO policy estimates.

Trudeau is now saying the party will use the PBO on some but not all of his party’s campaign commitments. “I can assure you we have been and are working with the parliamentary budget officer on costing elements of our platform," Trudeau said. The key word in that sentence is “elements.” Policy wonks adding up campaign promises will be watching when a Liberal promise gets a PBO estimate and on what policies the party dodges its own initiative.