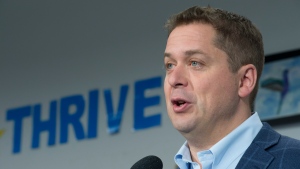 Conservative leader Andrew Scheer makes an announcement during a campaign stop at the Abilities Centre in Whitby, On. Monday, September, 30, 2019. THE CANADIAN PRESS/Jonathan Hayward

Halfway through the 2019 election campaign, the parties have their leaders in key battleground regions.

That meant on Monday Conservative leader Andrew Scheer flew to Toronto for a day of campaigning in the critical 905 area starting in Whitby. You might ask, “why Whitby?” The Liberals won the riding in 2015 but MP Celina Caesar-Chavannes, left the Liberal caucus to sit as an Independent and is not running for re-election. The riding was held by the late Conservative cabinet minister, Jim Flaherty. It is a prime target for a Conservative gain on election day.

Scheer also proposed another tax credit on Monday. This one would be directed at increasing support for disabled Canadians.

Liberal leader, Justin Trudeau, fresh off the release of the Liberal platform release Sunday spent the day in Toronto. The Liberals hold a wide lead in the city of Toronto but are in danger of losing seats in the 905 ridings. Gun violence is top of mind throughout the region and Trudeau wants to paint his policies as the best to combat gun violence. The Liberals gathered together a roomful of experts to talk with Trudeau about the impact of gun violence.

The NDP and the Green Party have their leaders in another battleground region -- Vancouver. Jagmeet Singh made one more big-spending promise Monday. He talked up the NDP childcare commitment. Singh said the NDP would fun universal childcare by 2030. That is a $10 billion plan to create 500,000-day care spaces. Singh said the NDP goal is to have $10 a day childcare across the country eventually.

The Green Party’s Elizabeth May is also in Vancouver. The Green Party’s best chances for seat gains are in British Columbia. May said today the election is a “climate referendum.” Both Singh and May will head east overnight. Singh needs to get to Montreal for the TVA French debate on Wednesday. May, who is not included in that debate, will campaign in Toronto on Tuesday.

Whether any of that will register with voters is the big question. Politicos I talk to rate this campaign so far as boring. Some of them go even further, saying it is very boring. Behind the yawns, everyone is waiting and wondering what the ballot question will be in 2019.

Reporters with the leaders keep asking about how they are reaching out for the support of the millennials.  Trudeau talked up the help the Liberals will give graduating students needing to repay their loans. Scheer said millennials would be attracted to his party’s policies to make it easier for first time homeowners. Singh’s childcare promise is another obvious play for young voters needing affordable care for their young children. None of that a ballot question makes.

For lack of anything better, if the election comes down to trust and leadership, the trend line is not looking good for Justin Trudeau. His ‘preferred for Prime Minister’ number has dropped almost four points in ten days from 32 per cent to 28.3 per cent. Trudeau is now tied with Andrew Scheer.

Trudeau has slid more significantly among those millennials. He is down almost 12 points over the past four nights of tracking. The millennial support has gone to Singh up 5.6 per cent, and May is also up almost three points. Pollster Nik Nanos says, “if millennials are uncertain as to whether they support Justin Trudeau as the person they think would be the best, then Justin Trudeau is in trouble.”