Notes from the campaign trail: Leaders prepare to face off for Monday's debate 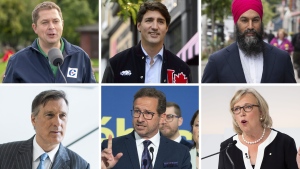 Late Monday afternoon, Canada’s six political leaders will make their way to the Canadian Museum of History in Gatineau. Then at 7 p.m., they will take the stage for the most important two hours of the election campaign.

The Nanos tracking poll for CTV News puts the Liberal Party at 36.7 per cent with the Conservatives four points behind. But the NDP’s Jagmeet Singh, Green Party leader Elizabeth May, Bloc Quebecois leader, Yves Francois Blanchet and Maxime Bernier, leader of the People’s Party of Canada, will get equal time at the debate with the two front runners, Justin Trudeau and Andrew Scheer.

On Sunday, Bernier sent out an email to his followers, saying, “millions of Canadians will be hearing about the People’s Party for the first time.” The debate will give Bernier an unparalleled opportunity to voice his controversial views on immigration and climate change. Bernier also said his party will start to air TV ads on Monday. Polls put the People’s Party support at about two per cent.

By Sunday afternoon, the leaders were all preparing for the debate. The Liberals must feel confident that Trudeau knows his debate brief. They sent him to a riding in Eastern Ontario, Hastings-Lennox and Addington, to plant trees. The Liberals won the riding in 2015 by less than 300 votes. Holding ridings like it will be vital if the Liberals hope to win a second majority. Trudeau took the time to point out that the Conservative Party has not released its platform before the debates.

The only other leader to take time for a photo op was Jagmeet Singh. He strolled through the Ottawa market with former NDP leader Ed Broadbent. The NDP said Broadbent would be giving Singh debate tips. Singh held his own and better in the TVA French debate last week. He has little to lose on Monday night, and I watch for him to make the most of the night and focus on the NDP’s commitment for what the NDP calls a “new deal for Canadians.”

The Conservatives kept Andrew Scheer away from the cameras on Sunday. Surely the stakes on Monday night are biggest for Scheer. Scheer was knocked off his Party’s messaging for three days dealing with his pro-life admission, his U.S. citizenship controversy and then dropping his candidate in Burnaby North-Seymour for her homophobic comments. After a middling performance in the TVA French debate, Scheer will need to take aim at Trudeau and steer away from any jibs coming from his Conservative leadership rival Bernier.

Elizabeth May has done one of these debates before. She was on the stage in the 2008 debate but excluded in 2011. As she left for Ottawa on Sunday, she tweeted Canadians should “watch as I try to add peace and loving kindness to five angry men.” May did add a smile emoji, but the point was made.

That leaves the leader of the Bloc Quebecois. With no candidates in English Canada Blanchet’s remarks, remember he too gets equal time, can be directed at viewers in Quebec.

With just two weeks until the election, the Conservatives still have a solid chance of defeating the Liberals. It is a pity that Canadians will not get an opportunity to see the two leaders, Trudeau and Scheer, debating each other head-on.