Notes from the Campaign Trail: Leaders set to kick into campaign mode 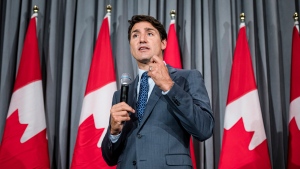 Prime Minister Justin Trudeau addresses a crowd at a Liberal fundraiser in Brampton, Ont., on Thursday, September 5, 2019. Trudeau is to call the next federal election Wednesday morning. THE CANADIAN PRESS/Christopher Katsarov

The federal parties can open their playbooks to page one and finally put their plans in action. Canada’s 43rd general election will formally get underway tomorrow morning when Prime Minister Trudeau goes to the Governor General. Then there will news conferences, photo ops, lots of campaign spin and each campaign will try to get a headline out of it all that sells its campaign theme.

So where should you put your money? A poll this morning from MainstreetResearch gives the Liberals a majority government if Canadians voted today. But they don’t! Nik Nanos isn’t nearly as sure. In an interview on CP24 Nanos said, “The Liberals, at least today, are not in majority territory.”

It will be important to watch where the campaigns send their leaders. It is safe to bet much of the attention will be focused right here in the Toronto-Hamilton area. There are more ridings in the GTHA than in all of Atlantic Canada and many of the ridings should be very competitive. For the Liberals to win a majority it will be critical to hold the party’s lock on Toronto and keep as many seats as possible in the 905.

After Trudeau leaves the Governor General and holds his news conference he will head to the airport to start campaigning. There is no final word on his first destination but Montreal might be one possibility. Trudeau’s Papineau riding is in Montreal. Another option is to spend a few hours on a plane to British Columbia. Or both – stay tuned.

The Conservative Party will have its leader, Andrew Scheer, in Quebec in the morning.  Starting there will be a signal to Quebec voters that they are valued. With the NDP in trouble in Quebec there are seats that will be in play there too.  To be successful in Quebec the Conservative message of affordability and taking care of the middle class will need to beat out social concerns about the Conservatives’ policies on issues such as the party’s stance on abortion.

As soon as the photo ops are out of the way in Quebec Scheer will fly to Toronto and hit a 905 riding north of Toronto. Scheer will kick off his GTA campaign in the riding of Vaughan-Woodbridge. The Liberals won the riding from the Conservatives in 2015. Teresa Kruze is the Conservative candidate in Vaughan and promises a big rally. She says Scheer will “get an outstanding welcome and it will kick off the campaign in grand style.”

The NDP leader, Jagmeet Singh, has spent the last few days in the GTHA hitting critical ridings and announcing policies on housing and, today in Hamilton, a plan to tax the very, very rich more. The NDP is being coy about Singh’s first destination on Wednesday but it will be in Ontario. Singh needs to be in Toronto Thursday evening.

Elizabeth May will be up very early for a dawn rally in Victoria. Then May will need to make her way across the country to get to Toronto for the first leader’s debate on Thursday evening.

Trudeau has declined to appear at that debate and that is one very good reason that he will probably stay out of the GTA until after the debate.  The leader of the new People’s Party of Canada, Maxime Bernier, will be in Toronto too. He very much wants to be in that TV debate but was not invited. Instead he will give a noon speech and do media interviews, including a stop at CP24.