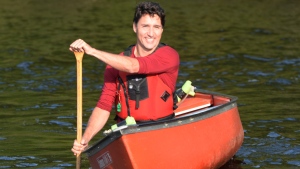 Leader of the Liberal Party of Canada Justin Trudeau paddles a canoe at the Lake Laurentian Conservation Area in Sudbury, Ontario on Thursday Sept. 26, 2019. THE CANADIAN PRESS/Ryan Remiorz

The promise parade in the election campaign slowed down on Thursday. After spending the first two weeks making one big money promise after another the parties seem to be finally running out of ways to spend tax payer dollars or promise tax credits. Or maybe they’re just taking a breather.

Liberal leader Justin Trudeau was in Sudbury and promised “a learn to camp” program for young Canadians. The Liberals say 400,000 children will learn camping skills and the program will help 75,000 lower-income families get a camping experience, a promise that the Liberals say will cost $75 million in 2020/21. Clearly the child-friendly announcement was timed to support the engagement of youth before tomorrow’s climate strike marches across the country. Trudeau told reporters he will be in Montreal to join the march there.

Andrew Scheer, the Conservative leader, went to Trudeau’s Montreal ridingof Papinea for his morning campaign event. Scheer didn’t make one money promise. Instead he revisited the SNC-Lavelin scandal, saying “Justin Trudeau lied to Canadians” and promising that a Conservative government would pass something he called the “No More Cover-ups Act.” The Conservative Party release said the act will “allow the RCMP to make an application to the Supreme Court of Canada to obtain evidence held behind cabinet confidence to allow for investigations to proceed.”

Reporters wanted to know if Scheer will take part in one of the climate marches. He won’t. Instead Scheer said he will be campaigning in Vancouver and will delegate Conservative candidates to join marches. At every Quebec campaign stop Scheer is asked about his support of a pipeline that would cross the province. Polls indicate the pipeline proposal is not popular in the province. Scheer’s pipeline position will get two tough tests next week. The first will likely come during his appearance on the popular TV show, Tout le monde en parle on Sunday night. The other will surely be raised during the TVA French language debate next Wednesday night . The other leaders all oppose building the pipeline.

The NDP’s Jagmeet Singh is making his way through British Columbia and added to his housing platform with a commitment to provide rental subsidies of up to $5,000 a year for low-income Canadians. By NDP campaign promise standards, this was a small promise. The program would require provincial support and the federal bill would be $1.35 billion.

Again reporters wanted to know if Singh will participate in a climate march. He confirmed that he will be in Victoria and join the march there. Elizabeth May is already in Montreal and has been saying for days that she is anxious to take part in the demonstration.

The Climate Strike Canada website makes clear the political goals of the young organizers. The student leaders say; “The September 27th strike will feed into the Canadian election rhetoric, and will incentivize political candidates to step up, and make the climate crisis the foremost issue in this election.” Candidates from coast to coast will be watching and listening to Friday’s strike closely. One possible impact on the campaign will be to force candidates to address their party’s climate policies during the last three weeks of door-knocking across the country.