Notes from the campaign trail: Parties make final pitch in battle for Quebec 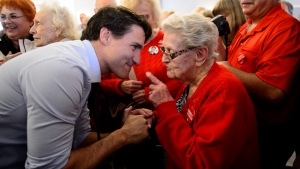 You know Quebec is in play and the stakes are high when Canada’s news channels start airing press conferences held by the leader of the Bloc Quebecois, Francois-Yves Blanchet. That’s what happened on Wednesday with five days to go in the 2019 election. Blanchet waited for the three other leaders to have their moments in and around Montreal before stepping to the microphones to remind Quebecers that when the votes are counted only the Bloc will do what is “best for Quebecers” in Ottawa.

Blanchet was blunt. He said the Liberals, Conservatives and NDP pretended the Bloc didn’t exist at the beginning of the campaign.  But Blanchet said in this last week all three are changing their minds, recognizing “the reality of what is going on in Quebec.” And Blanchet said the other parties campaigning on “fear” will not work.

Conservative leader Andrew Scheer was in Quebec Tuesday, ending the day outside Montreal with a rally of his supporters. He did his best to assure Quebecers that a Scheer government will make them “masters of their own house. Masters of your culture, masters of your institutions.” All the polling in Quebec over the past ten days has the Conservatives in third place. Scheer can only hope that his pledge to Quebec will win some supporters back to the Conservative camp.

Justin Trudeau also started his day in Quebec.  He suggested there is a real possibility of a Conservative win on Monday night. From there Trudeau attacked the Conservatives for running a negative campaign based on campaign strategies from other countries. "I think Conservatives need to continue to be called out on the nasty, negative campaign that they are running, because Canadians deserve better," Trudeau said. He went on to say that Canada needs a progressive government and must not go back to the “austerity and cuts of the Harper years.” Trudeau has the big target on his back and is forced to fend off the Conservatives on his right and the NDP on his left. But in Quebec the Bloc is targeting Trudeau too. So Trudeau made the case against the Bloc as well. Reminding Quebecers that the “Bloc exists to fight the federal government.” He asked Quebecers for their support to send Liberals to Ottawa and to have a strong contingent of Quebec MPs in the government.

The NDP’s Jagmeet Singh was the third leader to make his case to Quebec Wednesday. He stood at the Jack Layton Parc and was introduced by Olivia Chow, the late Jack Layton’s wife. Layton won big in Quebec  in 2011 and the NDP hope some of his legacy will rub off on their new leader. NDP support in the province has not cratered quite as badly as everyone predicted two months ago. But the party is expected to lose many of their 14 seats.

Singh took one final crack at selling himself and his party to Quebecers. He began by thanking them“for listening to me.” He went on to say “I think Quebecers see I share their values.” From there Singh went on the attack. He said the Bloc is not a “progressive option for Quebec.” But Singh was toughest on Trudeau. He charged Trudeau will always “choose the lobbyists and not the people” and that the Liberal leader makes promises in public but breaks his commitments in private.  Time and again Singh vowed that the NDP puts the people first.

The national leaders now head to vote-rich Ontario. Scheer was first into the province on Wednesday,talking exclusively of the Conservative majority government that Canada needs. He decried the alternative, a Liberal – NDP coalition. Singh will be in Toronto on Thursday. The high point will be a rally in Brampton.  The parties will turn to evening rallies to pump up their supporters. Those rallies will also provide the leaders an opportunity to talk to Canadians directly with no filter and no pesky questions from reporters.