Notes from the campaign trail: Parties to spend more money on online ads 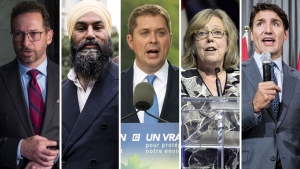 If you missed last night’s first “some of the leaders” TV debate, rest assured you did not miss a heated moment like that one from 1988.

Liberal leader Justin Trudeau’s vacant podium left the three leaders no option but to deliver their Trudeau attacks to the camera instead of finger-pointing and glaring at him. The same three will do it again without Trudeau at the Munk Debate on foreign policy on October 1.

Then, the following day in Quebec, Trudeau will debate the NDP’s Jagmeet Singh, Conservative leader Andrew Scheer and the leader of the Bloc Quebecois, Yves-Francois Blanchet. But that debate will be in French, and it will exclude the Green Party leader, Elizabeth May.

It is worth pointing out that the Liberal Party position is that it in choosing what debates Trudeau does he is merely following what the debate commission set up. Well no. Trudeau decided to do an extra debate in Quebec. By the way, the debate commission is new and creation of the Trudeau Liberal government.

The early days of every campaign find the leaders in ridings where their party is looking to make gains. We have seen that this week from all three. On Thursday the Liberals sent Trudeau to Kootenay-Columbia, an NDP held riding in British Columbia. But the “win new seat” script changed at the next Liberal stop. The Liberals hold two seats of the seven seats in Edmonton. Winning new seats in the prairie provinces will be tough for the Liberals, so the focus will be on holding what the party has across the west. As the week draws to an end, almost a third of Alberta’s ridings are without a Liberal candidate.

Andrew Scheer has spent three days in ridings the party dreams of adding to its column. His first stop, Trois Rivieres, is held by the NDP. The Conservative Party candidate, Yves Levesque, is the former mayor of the city. If the NDP vote in Quebec collapses the Conservatives hope Levesque’s profile will give them a win there on election day. (The Liberals want the Trois Rivieres seat too. Friday found Trudeau in the riding.) The Liberals swept Toronto in 2015, but the Conservatives sent Andrew Scheer into a handful of GTA ridings they want to win back after losing them in 2015. Scheer made policy announcements in two of those ridings - York Centre on Thursday and Friday in Etobicoke-Lakeshore.

Jagmeet Singh is doing the same thing. In downtown Toronto, he is focusing on the ridings of Danforth and Davenport. Former NDP leader, Jack Layton, held Danforth for years and Andrew Cash won in Davenport in 2011. Singh also went to Brampton where the NDP have hopes of finally winning a federal riding after some narrow losses. Singh has yet to make his way out of southern Ontario. With a serious shortage of cash, the NDP campaign is forced to use a bus for the first days of the campaign.

The prediction is that in this campaign, the parties will spend far more money on online advertising than anywhere else. A look at the latest numbers, posted on Wednesday shows the Liberals spending $268,000 since June and $45,000 in the last week. The Conservatives come in at $193,000 and $45,000 over the previous week. The NDP lags far behind with a total of just $60,000 spent since June, but half of that was forked out in the last week. The Green Party is not even in this game so far. It has spent only $1,500 since June and not a penny in the past week. The People’s Party of Canada spending is also negligible. Just $5,500 spent since June and $500 in the past week. Trolling online for donations is a big part of the ad buys so far. The Green Party has not used online ads to try to raise money, and yet the party badly needs more dollars to mount a national campaign.

It will be interesting to track these spending figures during the campaign. And remember, if I can see the spending, that means the parties can watch what their opponents are spending and how they are targeting their online advertising dollars. All of that is new for the 2015 campaign.