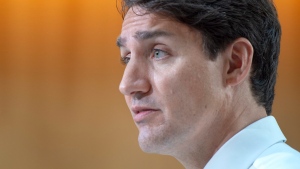 On Friday I wondered if polls released over the weekend would find Liberal leader Justin Trudeau was hurt by the release last week of brownface photos.

A number of polls are now in. Nationally the Nanos tracking poll, which is conducted on behalf of CTV News, has the election a statistical tie. Mainstreet’s tracking poll is slightly different. It shows Trudeau’s rating slipping over the last couple of days. But that poll has the Conservatives up by less than a point. It too is well within the margin of error. A Forum poll has the Liberals and Conservatives tied. Turning to an Abacus poll, the Conservatives are up two points, 34 per cent to 32 per cent, but again that is within the estimated margin of error for an online poll. Abacus did find a very high awareness, 88 per cent, among Canadians about the photos but 76 per cent said it either didn’t bother them or they accepted Trudeau’s apology.

I checked in with three GTA Conservative candidates who spent the weekend campaigning. Michael Ma in Don Valley East said affordability issues were top of mind for voters. He said the brownface issue only came up occasionally. In Etobicoke North, Sarabjit Kaur, also said most voters raised economic concerns but added that “people were also upset over the brownface photos.” Iftikar Choudry is the Conservative candidate in Humber River-Black Creek and he too said voters are concerned with the economy, crime and health care. Only when I asked him about the brownface photos did Choudry say some voters raised the issue.

Jenni Byrne managed the Conservative campaigns in 2011 and 2015. She was door knocking for Conservative candidates over the weekend in 905 ridings. Byrne told CP24 Monday the brownface photos “did not come up very often and when it did it came up from Justin Trudeau supporters, who were defending him and saying his apology was adequate.”

A primary target for all parties is the millennial voter. All the parties are focusing on the millennials. Younger Canadians voted in large numbers for Justin Trudeau in 2015. In 2019, people ages 18 to 35 make up the largest voting bloc and attracting their support could well be a decisive factor in the outcome of the election.

There are now indications support for the Liberals among millennial voters may be slipping. Joseph Angolano at Mainstreet says, “The movement among millennials is Liberals bleeding support to the NDP and Greens.” A closer look at the numbers from Forum gives the NDP’s Jagmeet Singh a bounce. Lorne Bozinoff at Forum says, "Over the past month or so, Jagmeet Singh has seen a considerable spike in personal popularity, including amongst millennials. In July, his approval with young people sat at a quarter (26%), but now, it's at 4-in-10 (40%). It's an impressive jump, and if Singh's improving personal popularity numbers translate into a bigger share of voter intention for the NDP, it could hurt the Liberals. We aren't seeing that yet, but it's something we're watching, closely."

Many of the expensive election promises by all parties are designed to woo young Canadians. On Monday Conservative leader Andrew Scheer made a couple of commitments to make housing more affordable for first-time buyers. Justin Trudeau committed the Liberals to deliver a pharmacare program and the NDP’s Jagmeet Singh continued to repeat his pharmacare and dental proposals. Each and every promise from all the parties was made with an eye to these young voters.

With four weeks to go before the election, no one really knows how these young Canadians will vote. It might hang on all those promises made to them. Or their decision may be based on an assessment of the judgement of the leaders. Expect more promises coupled with more attacks from the leaders on each other all with an eye to curry favour with younger voters.