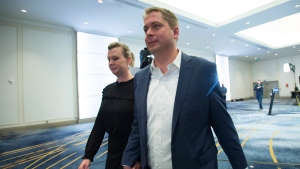 Conservative leader Andrew Scheer and his wife Jill are seen after addressing the media during a morning announcement during a campaign stop in Toronto Friday, October 4, 2019. THE CANADIAN PRESS/Jonathan Hayward

A couple of weeks ago Liberal Leader Justin Trudeau had a couple of bad days when brownface photos from almost 20 years ago were made public. Trudeau apologized. Politicos, including me, wondered what the impact would be. Well, in the end, many Canadians accepted the apology and moved on.

Yesterday it was Andrew Scheer’s turn. He had nothing to apologize for but he was forced to finally state his personal pro-life belief. Then, later on Thursday, he was back in front of the microphones to tell reporters, that, yes, he is a U.S. citizen but is in the process of renouncing it. On Friday, Scheer repeated that it is “not a big deal.” He is probably right. But that didn’t stop reporters from wondering if Scheer registered for U.S. military service when he turned 18. The party said yes, he did.

Scheer did try to change the subject Friday by focusing on a hot button issue. He announced Conservative commitments to combat gun violence and gang crime in Canada. The Conservatives want to end “automatic bail for gang members awaiting trial” and added a series of tougher measures to curb gang violence. It is not clear to me how many of these proposals, if made into law, would fare when challenged in the courts.

Trudeau spent two days this week in the GTA talking about guns and crime so it wasn’t surprising to find Scheer ending the week looking for his “tough on crime” headline. The focus on the GTA is going to get more and more important. With the parties in a statistical tie nationally, the regional battlegrounds will become more and more important. After the GTA, Quebec and British Columbia should get the most attention from the top four national campaigns.

All six leaders will be in central Canada for most of next week. With two key debates in Ottawa on Monday and Thursday there isn’t going to be much opportunity to burn a lot of fuel on their planes. But the campaign playbooks have had this debate week in their schedules from day one. Over the weekend the leaders will be given time to practice their lines and roleplay their answers and exchanges with debate prep teams. Monday will be a quiet day before the English debate that night.

There will be a short window to campaign on Tuesday and Wednesday before the leaders all assemble again for the French debate. But their focus will be on Thursday’s French debate. Then, as soon as that debate wraps, most Canadians will turn their attention to the Thanksgiving long weekend.

So what do you do if you want to reach Canadians? Advertising might be the answer, lots of advertising. In the last day the Liberals, Conservatives, and NDP have all spent money on Facebook. Heading into the weekend the Liberals have spent the most racking up a total of $470,418. The Conservatives are less than $4,000 behind in their Facebook spending. Like the polls, that looks like a statistical tie to me.