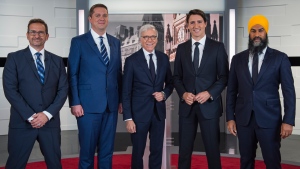 The early reviews are coming in on Wednesday night’s TVA French-language leaders debate. In Quebec, most of the reviews are not good news for Conservative Leader Andrew Scheer.

Le Devoir’s report on the debate concluded Scheer “took many blows.” Le Journal de Montreal said, “Scheer stumbled on abortion and climate.” And the Montreal Gazette led with “Liberal Leader Justin Trudeau was expected to be the target of most attacks, but it turned out to be Conservative Leader Andrew Scheer who absorbed most of the body blows in Wednesday night’s federal leaders debate.”

In Toronto, the Conservative leaning National Post headlined “Scheer on defensive” and the Globe and Mail focused on the three federalist leaders attacking Bloc Quebecois leader Yves-Francois Blanchet. The Toronto Star put the debate on page six and the Toronto Sun’s coverage was on page four. With the debate TV highlight clips in French, and limited to a total of three minutes, it means that English news channels used very few clips. It is another factor limiting the impact of the debate outside of Quebec.

Since day one of the campaign, Scheer’s stand on abortion has come up in almost every exchange with reporters. The issue led off the French debate. Each leader asked Scheer to tell Quebeckers his personal view. Scheer stuck to his line that as Prime Minister he would not reopen abortion rights in Canada. After the debate, Scheer flew to New Brunswick and on Thursday morning he finally came clean on his personal stand on abortion rights. Now Scheer says that he is “personally pro-life.”

Even before Scheer clarified his position, Trudeau re-stated his stand that the Liberals will always defend the rights of women, the LGBT community, and the rights of minorities. In Toronto on Thursday, Singh said Scheer lacked the “courage” to state his belief during the debate. Scheer’s acknowledgment of his position quickly became the talking point of the day in coverage of the campaign.

The other left over tidbit from the French debate getting play in English Canada Thursday was around the Liberals use of two planes to move the Liberal campaign around the country. At the debate, Scheer wondered why the Liberals needed two planes and suggested maybe it was to move props and costumes. Thursday Scheer called Trudeau “a phony environmentalist” for burning fuel on two planes. The Liberal comeback is that the party is buying carbon offsets for both planes. Scheer refused to answer why his campaign is not buying carbon offsets, saying only that the one plane the Conservatives use burns less fuel than the either Liberal plane.

My hunch is that Scheer’s performance at the debate means the Conservatives will be carving out more debate prep time for their leader before Monday’s all network English-language leaders debate.