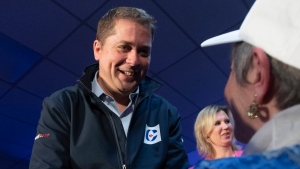 Conservative leader Andrew Scheer listens to a question during a campaign stop in Fredericton, Friday, October 18, 2019. THE CANADIAN PRESS/Adrian Wyld

With each passing hour a minority government is looking more and more likely. Two polls in the past 24 hours show the Bloc Quebecois getting stronger and stronger in Quebec and the NDP climbing steadily outside Quebec. If that combination produces more seats for those two parties, the Liberals and Conservatives will probably run out of room to get to the magic 170 seats for a majority.

So what do the parties do with all of that and three days to go before voting day?

For the third day running the Conservative leader Andrew Scheer chose to talk about one possible election outcome scenario, a Liberal-NDP coalition. And he upped the ante Friday, saying such a coalition will raise the GST from six per cent to seven-and-a-half percent. Scheer again and again called on Canadians to give the Conservatives the majority government it needs to deliver its platform of tax cuts and get Canada back to a balanced budget.

Asked about the consequences of a minority government Scheer said “I will not comment on scenarios.” However Scheer billed his Conservative majority pitch on Friday as the only way to stop the scenario of a Liberal and NDP coalition. There is one possible reason Scheer won’t answer any other minority scenarios. Only one party, the Green Party, has entertained working to prop up a Conservative minority.

The leader of the Bloc Quebecois, Yves-Francois Blanchet, has made it clear that the Bloc will cast its votes in parliament for what it sees as best for Quebec. Support for the Conservatives right now is running at about 12 per cent in Quebec. It will be difficult for the Bloc to work with a party that has so little support in the province.

On Friday the leader of the NDP, Jagmeet Singh, called Scheer’s GST speculation as “patently made up.” Singh said Scheer “is making stuff up because he is getting desperate.” From there Singh went on to make it clear that the NDP will not work with the Conservative party in a minority Parliament.

Singh told supporters in British Columbia that no one owns their votes and Canadians “can choose someone that is going to stand up for you.” It is a positive message and it is buying the NDP more and more support in the polls. The NDP numbers are creeping back to 2015 levels. If the final weekend of polling gives the NDP even more support Singh’s campaign could, maybe, come close to the 44 seats the party won in 2015.

Liberal leaderJustin Trudeau dodged questions about the success of the Bloc and NDP campaigns over the past six weeks. “We know that you can't take any votes for granted in an election and Canadians have an important choice to make about the kind of future they want for their kids,” Trudeau said. Trudeau was clearer when it came to the Scheer suggestion that the Liberals plan to raise the GST. “Those claims are entirely untrue,” Trudeau said. The Liberal leader was in Whitby and was quick to link Scheer to Doug Ford, the Premier of Ontario.  Trudeau said “It is unfortunate that the Conservatives keep having to make up attacks against us. But all they're offering is cuts, cuts four times greater than Doug Ford's.”

The Conservatives and Liberals are still in a statistical tie nationally. With three days to go the message tracks are hardening. Scheer and Trudeau are taking direct aim at each other. That gives Singh the opportunity to limit his jabs at the two front runners and push his more positive, upbeat line. Singh told voters they can choose the NDP that “is going to stand up for you.” The NDP message is the only one drawing new support outside Quebec. Its impact will be a key to what happens on Monday night.