'Nothing we're doing here is normal:' Ford government urged to move up reopening of economy

The Canadian Federation of Independent Business (CFIB) is calling on the Ford government to revise its reopening plan and “immediately reopen” parts of Ontario’s economy, including non-essential retail, restaurants, and gyms.

In an open letter released on Tuesday, the CFIB slammed the Ford government’s reopening plan for being too slow and urged the premier to revise Ontario’s reopening dates so they are “in line with other provinces.”

“Yes, other provinces have used business lockdowns at various points during the pandemic. But no jurisdiction in North America – and very few in the world – have locked down businesses for the length of time businesses have been closed in Ontario,” the letter read.

“From decisions like closing ski hills and golf courses, to completely shutting down non-essential retailers and hair salons, the phrase ‘only in Ontario’ has been far too common throughout the pandemic. In British Columbia, retailers were never closed to in-store customers.”

Ontario’s stay-at-home order will expire tomorrow but the province has said it does not plan to begin Stage 1 of the reopening plan, which will see patio dining resume and non-essential retail reopen at 15 per cent capacity, until around June 14. Hair salons are not expected to reopen in Ontario until sometime in July, when the province enters Stage 2, and gyms will remain shuttered until Ontario enters Stage 3, likely not until the end of July or August.

“Tomorrow is supposed to be the day that our retailers, our restaurant patios, our gyms and our hair salons finally reopen their doors after two long months of provincewide lockdown,” the CFIB's letter continued.

“Instead, Ontario’s reopening plan has them remaining closed for at least another two weeks, and many for much longer. Meanwhile, COVID cases continue a strong downward trend, and estimates show vaccinations have already hit the first-dose threshold for Step 2.”

The province saw a significant drop in the number of new infections on Tuesday, reporting a daily case count of just 699, the lowest single-day total since October.

Dr. David Williams, Ontario’s outgoing chief medical officer of health, has said he would like to see case counts drop down to between 500 and 600 for multiple days before easing restrictions. The Ford government previously confirmed that nothing will reopen in the province until two weeks after 60 per cent of all adults had received their first dose of a COVID-19 vaccine, a milestone the province hit last week.

CFIB is urging the province to immediately reopen all retail stores at 20 per cent capacity, restaurants for patio dining and limited indoor service, hair salons and barbers by appointment, as well as gyms and recreational activities by appointment.

“I think we've been locked down for so long in Ontario that we've begun to think that what we're doing here is normal, that this is the way that other jurisdictions, even other Canadian provinces are handling COVID restrictions, and we're pointing out to the premier that nothing we're doing here is normal. Nobody is doing lockdowns for as long as Ontario has, as deep as Ontario has,” Dan Kelly, the president and CEO of the CFIB, told CP24 on Tuesday.

“Sure other provinces have used lockdowns, but they haven't locked down everybody and thrown away the key like we have here in Ontario.” 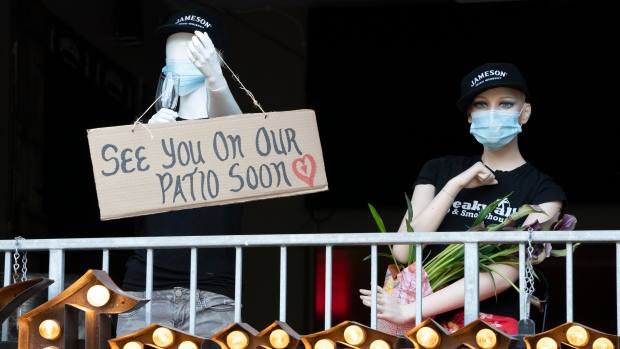 The CFIB, which represents about 38,000 small businesses in Ontario, is also asking the province to adjust its reopening plan to allow regions with lower case numbers and hospitalizations to reopen faster than regions with higher rates of COVID-19 transmission. The group is also asking the provincial government to provide a “detailed timeline” for the full reopening of the economy, including events and entertainment, and approve a third round of funding through the Ontario Small Business Support Grant.

“Time is quickly running out for Ontario small business owners to keep their firms afloat. Many have exhausted their personal savings and as of July, will start losing access to federal funding programs while still being fully shut down by the province,” the CFIB's letter concluded.

“Swift action must be taken now to begin reopening the provincial economy for the sake of saving small business.”

Restrictions will remain in place when stay-at-home order expires

The province confirmed Tuesday that no new businesses will reopen when the stay-at-home order expires tomorrow.

“We’ve seen great progress in our fight against COVID-19 in recent weeks, but now is not the time to let our guard down,” Solicitor General Sylvia Jones said in a written statement.

“With the Stay-At-Home order set to expire, we need to provide people with certainty so that they can continue to follow public health guidance. Doing so will help us to meet our goal of starting to gradually lift some restrictions when we enter Step One of the Roadmap when it is safe to do so.”

While the provincial government has not confirmed if talks are underway to reopen parts of the economy sooner than June 14, Kelly said he has heard rumblings that the province is considering reopening some businesses as early as this Friday.

“That would be welcome news to small firms that are hanging on by their fingernails. Right now, I'm hoping that we're going to see that,” he said.

“Many, many MPs, including government MPs, are super frustrated at their own premier, at their own government, and they have been sharing with me that they are working behind the scenes to try to get the government to take a different tact, and this includes members of the Ontario cabinet.”

Kelly said if the province plans to allow businesses to reopen on Friday, advance notice will be required.

“Businesses do need a little bit of lag time to be able to get things in order. I mean the restaurants need to reorder fresh produce, staff need to be recalled,” he said.

“We do need to make sure that business owners are given a bit of notice but look, if we can get the message out tomorrow that businesses are going to be allowed to open potentially as soon as Friday… that will provide some businesses with at least a pathway to potentially make it."