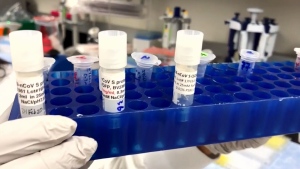 HALIFAX -- Nova Scotia has recorded its first death related to COVID-19 -- a woman in her 70s with underlying medical conditions.

"I had hoped this day would never come and I'm deeply saddened that a Nova Scotia family is going through this," McNeil said. "My deepest condolences go to the family and friends who are grieving today."

Nova Scotia was the last province in Canada to report its first cases of COVID-19. That was on March 15. The province declared a state of emergency a week later.

Since then, 310 cases of the viral illness have been confirmed, with 103 cases added since the weekend began. The confirmed cases -- 17 of which were added Tuesday -- range in age from under 10 to over 90.

Eleven people with COVID-19 were being treated Tuesday in Nova Scotia hospitals.

"This virus is dangerous," McNeil said. "We have to work to slow it down to protect ourselves, those we love and everyone in our communities so that no other family has to suffer a loss like this."

While most cases in Nova Scotia have been connected to travel or a known case, the province has confirmed cases are now being linked to community spread.

A 78-year-old retired police officer in Newfoundland became the first person in Atlantic Canada to die from COVID-19 complications on March 30. The province recorded a second death -- a 61-year-old woman -- on Monday.

By Tuesday morning, there were more than 16,600 confirmed and presumptive cases of COVID-19 in Canada. Quebec was reporting about 8,500 cases and Ontario had about 4,300.

Across Canada 323 deaths had been reported -- more than three quarters of them in Ontario and Quebec.

Most people diagnosed with COVID-19 experience mild or moderate symptoms, such as fever and cough, and the majority of those who contract the virus recover. Some may have few, if any symptoms, or may not know they're infected because symptoms of the novel coronavirus are similar to a cold or flu.

However, for some, including Canadians aged 65 and over, those with compromised immune systems and those with underlying conditions, the illness can be much more severe. Among the Canadians diagnosed with the illness so far, fewer than 10 per cent have required hospitalization, with fewer than five per cent of cases requiring admission to the ICU.