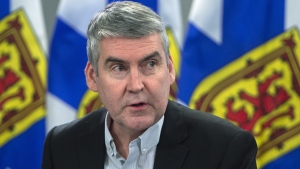 Premier Stephen McNeil attends a briefing in Halifax on Tuesday, March 17, 2020. McNeil has announced he is stepping down as premier and Liberal party leader.THE CANADIAN PRESS/Andrew Vaughan

HALIFAX - Nova Scotia Premier Stephen McNeil unexpectedly announced his departure from politics Thursday, saying he stayed on the job longer than planned because of the onset of the COVID-19 pandemic.

After 17 years in provincial politics it is simply time for a change, the Liberal premier said, adding he is ready for a rest.

“I'm not leaving because I don't like the job,” McNeil told astonished reporters who thought they had gathered to cover a cabinet meeting. “I love the job as a matter of fact, and I've had tremendous support.”

“Many people are surprised today that I work with, and I'm sure many Nova Scotians are surprised.” A change in leadership, he said, is “the right thing for the province.”

McNeil, who headed two majority governments following his 2013 and 2017 election wins, said he will stay on until the Liberals choose a new leader. He was first elected in 2003 as the member for the riding of Annapolis.

He said he initially wanted to leave in the spring, but the pandemic postponed those plans.

“I was actually going to make this decision in April and then COVID-19 hit and I re-evaluated,” McNeil said. “Then we (Nova Scotia) flattened the curve and there was an opportunity for the party to prepare for a leadership contest and a new leader.”

The premier said the past five months had been difficult for the province because of a series of tragedies, including a mass shooting that claimed the lives of 22 people in central and northern Nova Scotia in April, and the crash later that month of a Cyclone helicopter from a Halifax-based navy vessel, which killed six service members.

“Our province has experienced one tragedy after another and we've seen a lot of death, said McNeil. ”Families have suffered immeasurable loss and it is my hope that the generosity of others and the support from fellow Nova Scotians will continue to help heal broken hearts.“

The announcement caught many off guard as the premier had previously said he expected to attempt a third term. McNeil said he only advised the caucus of his decision earlier in the day.

He said promoting private-sector growth and keeping a handle on the cost of public-sector wages are among his key accomplishments.

McNeil noted his battles with public-sector unions, including a divisive contract dispute with teachers during which the government imposed a wage settlement.

“There's lots of people that still tell me we got it wrong - I think we absolutely got it right,” he said. “People would say I've taken a whole lot of things away from unionized employees in the province. It couldn't be further from the truth. I just slowed the growth (of wages) ... It allowed us to invest in other parts of our economy.”

McNeil said he takes pride in the fact his government posted five consecutive balanced budgets before the COVID-19 pandemic hit and sent the books deep into the red.

His most vivid memory as premier, he said, came during the restorative inquiry into decades of abuse at a former Halifax orphanage - the Nova Scotia Home for Colored Children. McNeil made a formal apology to victims on behalf of the province in October 2014.

“It is something I will carry with me, it changed me in some ways,” he said.

McNeil's sudden announcement also surprised his political opponents. Progressive Conservative Leader Tim Houston, who routinely sparred with the premier in the legislature, thanked him for his service.

“Our political differences are well-documented,” said Houston. “I think it's important to democracy that you have differing opinions and that you have spirited discussions but that you have respectful discussions. I've certainly tried to do that and I believe the premier has as well.”

“It's a major moment,” Burrill said of McNeil's departure. “I've always acknowledged him as a person of real ability, with a singular focus and determination.”

McNeil said he doesn't have any immediate plans for his future after politics.