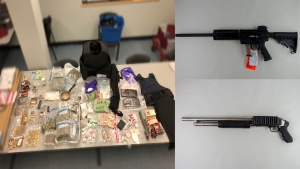 A 41-year-old man is facing 17 charges in connection with a drug and firearm investigation in Peel Region.

Peel police began an investigation last month into the activities of a man they believed to be performing drug transactions in the region.

On Wednesday, police say they executed a search warrant at a home near Bovaird Drive and Kennedy Road in Brampton.

Police say they found drugs and firearms concealed inside the home. These include over 1,000 rounds of ammunition, cocaine, fentanyl, methamphetamine, 12 gauge shotgun, 9 mm Carbine rifle, bulletproof vests, MDMA, and quantity of cash.

“The resolve of investigators from the Specialized Enforcement Bureau has removed these illicit drugs and firearms from our streets. Possession of illegal firearms and drug trafficking is a dangerous combination and poses a significant risk to our communities,” Nick Milinovich, Deputy Chief of Investigations and Emergency Services, said in a statement.

“It cannot be tolerated and will continue to be a priority for our service.”

Boodhoo appeared at a Brampton court on Thursday.