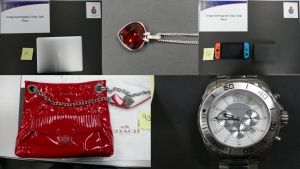 Several of the stolen items recovered during the investigation is seen in this photo. (Supplied)

York Regional Police have laid more than 200 charges against 45 people in connection with break-and-enters and thefts in the Greater Toronto Area.

Dubbed as Project Condor, police started an inquiry between April 2019 and Oct. 2019 into individuals and groups who were allegedly breaking into GTA homes.

Most of the incidents happened between 9 a.m. and 5 p.m. when people were at work, or away from homes, police said.

"In these incidents, victims were followed from a bank where their vehicles were disabled or left unattended, at which time the suspects would take the cash that was withdrawn from the bank," police said in a news release on Friday.

Police recovered $62,000 in cash as a result of the investigation.

Multiple search warrants were executed on the suspects' vehicles and residences during the five-month-long investigation.

More than $150,000 worth of stolen property, including jewelry, designer bags, designer clothing, currency, and vehicles were seized.

All 45 people are facing more than 200 charges, including break-and-enter, possession of property obtained by crime, and theft over and under $5,000.

"Many of the accused do not have resident status in Canada, and 14 suspects have been deported to their countries of origin," police said. "Nine offenders without status in Canada are still before the courts. Immigration proceedings for those offenders will commence upon completion of their criminal charges."

According to York Regional Police, they are working with the Canada Border Services Agency to resolve immigration issues in the investigation.

Police have posted photos of the recovered items on a website. They are asking the public to review the images and contact police if you recognize your stolen property.