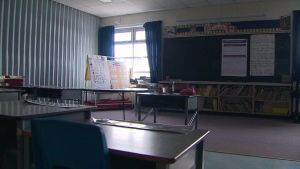 The union representing Ontario’s English Catholic school board teachers says that they will suspend a series of rotating strikes planned for next week in order to head back to the bargaining table with the province.

The Ontario English Catholic Teachers' Association was supposed to hold rotating one-day strikes in dozens of school boards next week but in a statement issued late Friday afternoon President Liz Stuart said that action will now be put on hold in light of “meaningful” discussions with the province.

“We have always said that our goal is to negotiate a deal at the bargaining table and it is clear that our efforts are being effective in forcing the government to work with our association toward a fair agreement,” she said. “Catholic teachers have demonstrated that we will do what is necessary to stand up against this government’s cuts to publicly funded education. Should negotiations cease being productive, further strike action will be announced.”

See below a statement from OECTA President Liz Stuart.

Representatives for OECTA participated in several bargaining days with the province this week, however the talks came to a conclusion on Thursday night and members participated in a provincewide strike by Ontario’s four teacher unions on Friday.

In her statement, Stuart said that a mediator has since invited both parties back to the table for Monday and has assured her that “the discussions will continue to be meaningful.”

In anticipation of those discussions, she said that a decision has been made to suspend all rotating strikes for now.

That means that one-day strikes that would have affected the Toronto Catholic District School Board on Monday, the Halton and Durham boards on Tuesday, the Dufferin-Peel board on Thursday and the York board on Friday will not go ahead.