OHIP to fund child's U.S. surgery but many other kids left stranded 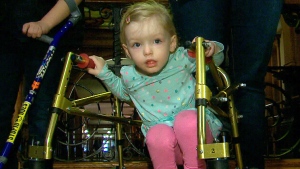 An Ontario girl with cerebral palsy will finally be able to receive funding for an expensive American surgery but other children in a similar situation are left waiting for OHIP to make a decision on their case.

Three-year-old Madison Ambos and her family were given the good news Thursday that OHIP would cover the cost of a $30,000 surgery that would help ease the painful stiffness in her limbs, and allow her to walk without a walker.

The Ambos family fought for funding for more than a year. Part of the issue is only two surgeons in the province are qualified to do the assessments and approve funding.

Many families don't end up qualifying for funding.

Madison’s mother Katherine Ambos used the good news to highlight the issues many Ontario families face. She accompanied other families to Queen’s Park and they all told reporters about some of the hardships they face on a daily basis.

“Madison is just one child. I have a list here of 21 children in the province who currently do not have funding from OHIP for the same surgery that Madison just received funding for,” she said.

Leah Bellamy is one of those children who qualify for the surgery but not the funding.

The Whitby toddler has defied all odds since the day she was born.

Leah was born prematurely, at 27 weeks and 5 days. Doctors told her parents Laura and Christien that their daughter would likely not survive her first year.

Now nearly two years old, Leah has proven doctors wrong. She recently scored a high average for language and a solid average for cognitive function, her parents said. She can hear and see perfectly but she suffers from cerebral palsy, spastic diplegia.

“Her legs are already starting to show deformities,” Laura Bellamy said through a steady stream of tears. “I can already see it’s painful for her…I could see she already doesn’t understand what’s happening to her body. She’s not even two!”

“She just wants to keep up with her peers,” Bellamy continued. “When I pick her up from school, she’s laying in the snowbank as other kids are building snow castles.”

Desperate to ease her daughter’s pain, the couple has started a Go Fund Me campaign to help raise funds for the costly procedure, known as Selective Dorsal Rhizotomy surgery.

“It is incredibly difficult to qualify for OHIP funding, very few Ontarians have been able to and many have been forced into trying to fund the cost of the surgery themselves,” the child’s Go Fund Me page says. “Due to the extremely limited criteria, Leah does not qualify.”

They’re hoping they can raise enough money to travel to St. Louis Children’s Hospital in Missouri where the surgery is routinely performed by the very doctor who shaped the treatment.

This specific surgery used to be performed in Ontario but it’s not available anymore. Ontario’s health ministry now says they are looking into whether they can bring it back.

In the meantime, Ontario Health Minister Eric Hoskins said efforts will be made to streamline the application process to help ease some of the stress families face.

“It’s despicable that it took so much effort for Madison’s family to get this life changing surgery,” said Progressive Conservative Health Critic Jeff Yurek.