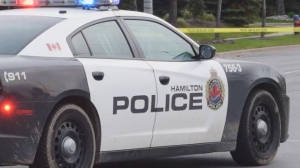 One man is dead following a shooting at a Tim Hortons parking lot in Hamilton, police say.

It happened at the Tim Hortons location on King Street West, near Caroline Street South, shortly before 3 p.m.

Police said one male victim was pronounced dead at the scene and no other injuries were reported.

Hamilton police have not released any information on possible suspects.

Police are asking people to avoid the area as officers conduct an investigation.