One person arrested after stabbing in downtown Toronto 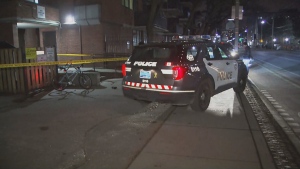 Toronto police are investigating a stabbing in the area of Sherbourne and Dundas on Thursday, Jan. 21, 2021.

One person is in custody after a stabbing downtown Thursday evening that left another person seriously injured.

Police said it happened at a building in the area of Sherbourne Street and Dundas Street East just before 10:30 p.m.

Paramedics said they transported one person to hospital with serious but non-life-threatening injuries.

The suspect fled the scene, but police said one person was later arrested.

There is no word on possible charges.