One person dead, two others in serious condition after high levels of carbon monoxide found at home in Bridle Path 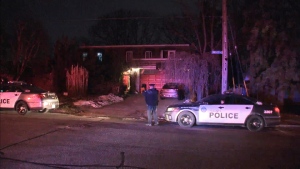 Emergency crews respond to a carbon monoxide incident at a home in the Bridal Path area Monday, January 25, 2021.

One person has been pronounced dead and two others are in serious condition following a call about a carbon monoxide incident in the Bridle Path neighbourhood.

Toronto Paramedic Services said they responded to a call in the area of Lawrence Avenue and The Bridle Path at around 8:50 p.m.

Firefighters found high levels of carbon monoxide when they responded to the home, Toronto police said.

Three people, including a pediatric patient and a senior, were subsequently rushed to hospital. One man was transported to hospital with critical injuries while two other people were transported with serious, but non-life-threatening injuries, paramedics said.

One of those people was pronounced dead in hospital, police said.

Two officers who helped bring people out of the home also went to hospital to be checked over as a precaution.

Officials have not said where the poisonous gas came from.

Emergency crews respond to a carbon monoxide incident at a home in the Bridal Path area Monday, January 25, 2021.