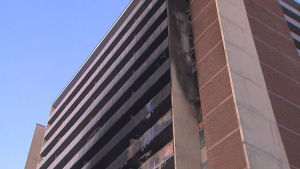 Residents of the North York highrise have been displaced after a five-alarm blaze tore through the building on Friday evening. (CP24)

One person has been found dead on an eighth-floor balcony after a five-alarm fire broke out at a North York apartment Friday evening.

The body was found when the fire was contained at around 1 a.m., Deputy Fire Chief Tony Bovata told reporters on Saturday morning.

“Some secondary searches were conducted and investigations, at which point a body was located on one of the balconies,” he said.

Crews were called to 235 Gosford Boulevard, just north of Jane Street and Shoreham Drive just before 5:30 p.m. after visible flames and heavy smoke was seen billowing out.

Firefighters rescued six people from the building and were transferred to paramedics. One person was transported to a hospital in serious but stable condition, Toronto paramedics said.

“Unfortunately, in the suite of origin and a couple in the vicinity, the conditions were just such that there was physically no way for us to get in and complete that survey,” Pegg said.

When asked if there was a way to rescue someone from the eight-floor, the fire chief said the safest and most efficient way to fight the fire was from the inside.

Pegg said at the peak of the fire 20 trucks and almost 100 personnel were on the scene.

Firefighters were working on every floor of the building, moving door to door to search for occupants, he said.

Pegg initially told reporters on Friday night that there was no indication that a person was unaccounted or missing.

“I do my very best to provide the most accurate information I can give you while it’s happening. And the reality is there are times when that information evolves, and at times it changes.

And this is one of the times or one of the circumstances where that information changes.”

Pegg said he was heartbroken after the discovery of the body was made.

There will be an internal post-incident evaluation into the fire, the fire chief said.

Currently, there is no information on the victim.

The Office of the Fire Marshal (OFM) is leading the investigation into the cause and origin of the fire.

Richard Derstroff of the OFM said the fire originated in apartment 808. The victim was located on the unit’s balcony.

“I don’t have specific information to determine that it’s suspicious in this case. We’re going to look at all possible causes,” Derstroff said.

He said the victim has been removed and transported to the coroner’s building.

There is significant damage on three floors of the building, Derstroff said, adding that the eighth floor will be inaccessible for a long period.

“At this point in time, I have nothing that leads me to believe that there’s anything criminal. However, the investigation is still in its preliminary stages, and that might change,” Toronto police Insp. Jim Gotell said, speaking to CTV News Toronto.

The city’s Office of Emergency Management (OEM) has partnered up with the Canadian Red Cross to open Driftwood Community Centre for residents who are displaced by fire.

“We are encouraging any residents out there to look towards family and friends first and foremost, if they have an opportunity. But if they don't, certainly register at the Driftwood Recreation Facility so that we have their name and their information and what their needs are,” Jansen said.

Jansen said inspections have to be completed to determine when the residents could be allowed back into the building.

He said residents who need access to get their medication or are being escorted back into the building to retrieve their items.

In a statement, the university said they have offered to make shelter space available in the Tait Mackenzie Centre building and are working with the city and Red Cross to determine if there are any other needs they can accomodate.

“As of tomorrow, we're going to be starting the process of relocating a lot of these residents to York University,” said Jansen, adding that the city is discussing the long-term plan.

He said the TTC will be providing buses to relocate everyone from the centre to the facilities at York.

Another facility located beside the university has been identified as possible shelter if there will be an overflow, Jansen said.

“We are fortunate a lot of organizations have stepped up and are providing a lot of food and other donations.”

The Red Cross is asking people not to bring donations because they are stocked with the basics that meet people’s immediate needs.

"The time that it takes for sorting and distribution of these are times that we need to spend with the residents who have been out of their homes for the day and to meet their needs,” said MairiAnna Bachynsky.

As for the residents’ pets, Jansen said Toronto Animal Services are looking after them.

“I do know that one kitten was rescued by our firefighters and brought down and repatriated with the family as well,” he said.