One person found dead inside burning home in Georgina: police 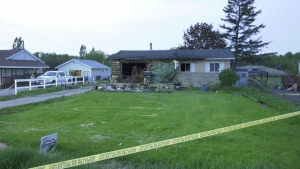 Emergency crews are on the scene of a fire in Georgina.

One person is dead after a house fire in Georgina Friday afternoon.

York Regional Police said the fire broke out at a residence on Highway 48, near High Street, just after 3 p.m.

One person was found dead inside the home.

Police said the Ontario Fire Marshal was called and is investigating.

“Investigators are appealing to anyone who may have seen or heard anything in the area to please come forward,” police said, asking anyone with information to contact them at 1-866-876-5423 ext. 7341 or Crime Stoppers anonymously at 1-800-222-TIPS.

Emergency crews are on the scene of a fire in Georgina.