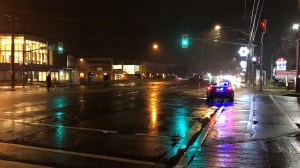 One person has been rushed to the hospital with life-threatening injuries after being hit by a vehicle in York Region Monday night.

Emergency crews were called to the area of Yonge Street and Regatta Avenue after receiving a report of a collision.

Not much is known about the circumstances of the crash, but police say that one person has been transported to a trauma centre with serious, life-threatening injuries.

The driver involved in the collision remained at the scene.

Roads in the area are closed as officers investigate the incident.