One person walks into hospital following shooting in Scarborough 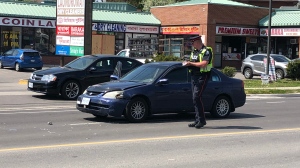 Toronto police are investigating a shooting in the area of Warden and Danforth. (Patrick Darrah)

Toronto police are investigating a shooting in Scarborough after one person walked into a hospital Sunday afternoon.

Police said the shooting happened in the area of Danforth and Warden avenues.

There were reports of people in vehicles shooting at each other, police said.

When officers arrived, police said no victim was located, but shell casings were recovered.

Police later said a shooting victim walked into a hospital.

The injuries are believed to be serious. Police said it is unclear if the person is connected to the incident.

Police said one vehicle fled, while a second vehicle was disabled at the scene.

No suspect information at this time.