One suspect arrested, another sought in Mississauga stabbing 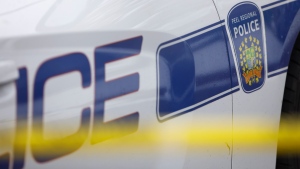 Peel police are looking for a suspect after one person was stabbed in Mississauga on Saturday afternoon.

The stabbing occurred near James Austin Drive and Acorn Place in the area of Eglinton Avenue East and Hurontario Street shortly before 12:30 p.m.

Police said a male victim was transported to the hospital in non-life-threatening condition.

One suspect has been arrested, while a second suspect remains outstanding, police said.