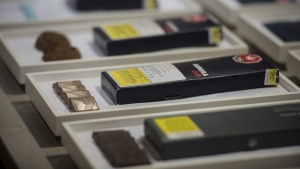 Chocolate edibles are displayed at an Ontario Cannabis Store in Toronto on Friday, January 3, 2020. THE CANADIAN PRESS/ Tijana Martin

TORONTO - Ontario's cannabis wholesaler is temporarily capping the number of products retailers can order and expanding its delivery window as it works through a backlog caused by a cyberattack on its logistics partner.

The Ontario Cannabis Store said in a Thursday letter to retailers that shops will be limited to ordering no more than 30 packs of product.

"This will create even access to products for all stores and will avoid creating a larger backlog of orders that could delay us from getting product to stores as quickly as possible," said the letter signed by OCS CEO David Lobo and seen by The Canadian Press.

The backlog stems from an Aug. 5 attack affecting Domain Logistics, the company behind the OCS's third-party distribution centre, which has not responded to a request for comment.

Since the OCS disclosed the attack on Monday, Ontario cannabis stores have been worried the delays will cause them to lose sales — and customers — because their supplies are dwindling and the province's roughly 1,300 shops have no choice but to purchase the product they sell from the OCS.

The OCS pushed out a small number of orders last night, but to clear the backlog, Lobo said it will make deliveries seven days a week between 6 a.m. and 10 p.m.

The OCS confirmed the order cap and new delivery window on Thursday afternoon.

It noted in the letter it might have to move to a 24-hour delivery window until it has fully returned to standard operations.

The situation has created a headache for pot shop owners trying to make due with limited supply they still have from last week.

Anthony Horvath, the owner and CEO of Tonik Cannabis in Brantford, Ont., has already run out of some products and can't afford to keep a stockpile for unexpected situations like this one.

"We're a small, independent, family-owned business and we only have the one location, so I can't have half a million dollars of inventory sitting here and six weeks worth of back stock for a situation like that," he said.

"In many cases, we order just in time just to keep our inventory costs down."

Horvath has received no indication when his next delivery could arrive, making staffing challenging.

"I may be told at 3 a.m. in the morning expect your delivery guy to come by and we still have to arrange to have someone open up," he said.

The product that gets dropped off will be significantly less than Tonik Cannabis is used to receiving.

Horvath typically orders between 250 and 300 cases of products, much less than the 30 he is being limited to.

He said, "My concern is that even though I placed an order for 30, I may only get 25 because some products simply won't be available, so it's probably going to be even less."

Jaclynn Pehota, executive director of the Association of Canadian Cannabis Retailers, called the cyber attack a "catastrophe that was dropped in (retailers') laps."

Rather than wait days to share why deliveries were being delayed and offer a plan to resume them, she said it would have been "comforting" for retailers to be told what was going on and how they would be supported.

The incident, she added, highlights the monopoly and lack of contingency plans the OCS has in place.

"A single supplier is a very insecure supply chain," she said.

"The fact that it has taken a week and there is nothing in place to supplement or backup that single supply chain is a catastrophic failure... and the fact is people are going to lose revenue."

Chocolate edibles are displayed at an Ontario Cannabis Store in Toronto on Friday, January 3, 2020. THE CANADIAN PRESS/ Tijana Martin