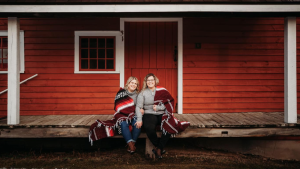 Two Ontario women who were refused service by a wedding videographer who told them she doesn’t film gay weddings say they have received overwhelming support since posting about the incident online.

Kelly Roberts and Mallory Arthur were searching for a professional to film their wedding, planned for October of next year, when they came across a company in Brantford whose work they admired.

The 26-year-old Woodstock, Ont. women reached out to “Caramount Pictures and videography” last week to inquire about their services.

In an email, Roberts made sure to state that they were a same-sex couple as they’d already been rejected, on the basis of their sexuality, by one officiant they’d tried to hire.

When they received a response from videographer Cara Hamstra while driving home from the grocery store on Monday, Roberts was initially excited.

But as she read on, that excitement quickly faded.

“I say this with much care, because I know that your union is incredibly important to you, but we do not film homosexual weddings,” the email read.

“I read that line and I just kept repeating ‘this isn’t real. There’s no way that she just wrote that to me,’ she said in an interview with CTV News Toronto. “My heart sank, my hands got shaky, I was just in complete shock that that was somebody’s response to me.”

She added that while she’s accustomed to subtle homophobia, especially living in a smaller community, she was nonetheless amazed to encounter it in such an overt way.

“It’s just how she made it known to me that the only reason she would not work with me is my sexuality and I think that’s the part that struck a nerve in me,” Roberts said. “She could’ve literally just told me that she was already booked that day and I could’ve moved on. That she had to make that point known was what really hurt me.”

Shocked, she took a screen grab of the message and posted it to Facebook, asking her followers if they could recommend any other videographers.

The post quickly went viral and has been shared more than 4,300 times so far.

It has also garnered thousands of comments, most offering support and encouragement.

The couple has since accepted an offer by one videographer who heard their story and offered to film their wedding for free.

Hamstra did not return calls for comment from CTV News and she has since taken down her online presence.

Roberts said driving Hamstra offline was not something she wanted.

“I heard what’s happened to her Facebook page and her business page and that’s not something that I wanted to happen. I know it’s gotten quite aggressive on there. It’s nothing I would personally do,” she said. “I feel bad. My heart hurts for her. I wouldn’t want to be on the receiving end of that. But at the end of the day this issue is so much bigger than myself and my feelings.

“I think people need to see that although it’s 2020 and we’ve progressed so far, that it’s still happening.”

Roberts said that while she was disappointed, the experience will not taint her wedding.

“I think the conversation that it started and the awareness that it’s brought has made it worth it to me,” she said. “I can’t even put into words how touched and grateful I am for the literal outpouring of support we received.”