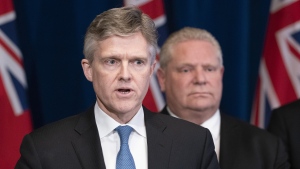 Ontario's budget deficit more than doubled from March to the end of June to $38.5 billion, as the coronavirus pandemic shredded jobs, consumption and the tax revenue that goes with them.

Officials pegged the deficit at $17 billion in the end of March, growing to $20.5 billion with reserves, with the Ford government hoping GDP (gross domestic product) would not decline through the year as a result of the coronavirus.

It instead sank and is expected to continue to fall by 6.7 per cent for the year, tanking government revenues.

Premier Doug Ford said the coronavirus has dashed any hope his government would return to a balanced budget by 2023 as he promised.

"Yes it has, I am going to be very frank– it’s a whole different situation six months ago compared to now – (but) we are going to continue being very fiscally conservative and responsible and through technology and other aspects of driving efficiencies."

Personal income, corporate income, sales taxes and other revenues fell by $10.8 billion up until June 30.

"While the current level of government spending and deficits are not sustainable over the long run, they are necessary for today," Finance Minister Rod Phillips said of the new projections on Wednesday morning.

The drop was softened by $6.1 billion in transfers from the federal government as part of the Safe Restart Agreement.

Meanwhile, expenses rose by $13.1 billion, as the province doled out money to fund pandemic pay ($424 million), part of the Federal Safe Restart Agreement for transit and cities ($2.4 billion) and panicked purchases of additional personal protective equipment for healthcare workers ($610 million).

The province's beleaguered long-term care system, the site of the majority of Ontario's 2,877 deaths from the virus, is receiving $218 million more for emergency capacity and infection control equipment and staff.

"More than 1,845 seniors and frontline health care workers tragically died in long-term care homes. It’s abundantly, heart-breakingly clear that $218 million was nowhere near enough to fund the iron-ring around nursing homes that was needed."

Shaw also questioned why the $309 million for school reopening was not specifically mentioned in the quarterly economic statement released on Wednesday.

Despite record increases in spending, borrowing costs for 2020-21 will be $741 million lower as interest rates have fallen.

Even with public debt now reaching the size of the total annual economic output of Denmark, Ford said he would not support tax increases to close the gap.

"I just don't believe in raising taxes," he said.

One million, two-hundred-thousand Ontarians lost their jobs in March and April, with 528,000 jobs returning in May and June.

Employment in Ontario was still eight per cent below its February peak at the end of July.

"We are in a recession today in Ontario and I would argue across Canada," Phillips said.

During the worst of the 2008 recession, Ontario employment declined by only four per cent.

"It took between 28 and 88 months to return to pre-recession employment in the past three downturns," Phillips said of expectations for Ontario's rebound.

He said that while recent job growth has the government "cautiously optimistic" about recovery from now until 2021, everything could be upended by a second wave of infections and the ensuing lockdown.

"We expect a rebound in advance of five per cent – but that all depends on a number of features that we don't yet understand," he said.

He said sustained success at containing the virus will lead to more economic activity.

"Two things happen globally when economies reopen – first is there are always flare ups. They always happen, and people's confidence is built by the ability to respond to those," he said. "The second thing that happens everywhere is that fewer people come back than is expected – whether that's to business, to school, to places of worship.

"People are hesitant not surprisingly so the confidence we build through our steady but very planned approach is the kind of thing that will bring more people back into the economy."

This latest fiscal plan keeps $2.5 billion in a reserve fund for the remainder of the year.

Ontario will release a fall economic statement no later than November 15.