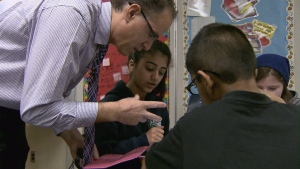 TORONTO -- Ontario's public elementary teachers will ramp up their work-to-rule campaign today as they continue contract talks with the government.

The Elementary Teachers' Federation of Ontario says educators will not plan any new field trips or distribute letters or memos from schools and boards.

The union says it is introducing the new phase of its job action to increase pressure on the government because of the slow pace of negotiations.

That job action follows a province-wide strike last week that shuttered every public high school and some elementary schools.

Education Minister Stephen Lecce has called on the Ontario Secondary Schools Teachers' Federation to enter third-party mediation in a bid to reach an agreement.

On Monday, the province's Financial Accountability Officer said if the province were to follow through on its original plan to increase the average high school class size to 28 students from the current 22, it would save $900 million a year.

The government has since changed that proposal, saying it will instead increase the average number of students in secondary school classes to 25. The fiscal watchdog has not estimated how much that amended proposal would save the government.

Teachers have said any increase in class sizes will compromise the quality of the education system, and the OSSTF is pushing back against the proposed changes in bargaining.

Lecce said Monday he would not comment on the potential savings that would be achieved by increasing class sizes.

"We've always been clear that this is not driven by a fiscal exercise," he said. "We're on track to spend an additional $1.2 billion this year, and we've added more money each and every year in budgets."