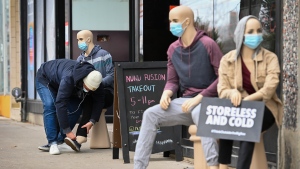 Jacob Gawrysiak puts a shoe on a mannequin as key messages are displayed in store fronts of select small business pleading for action to support local businesses during the COVID-19 pandemic in Toronto on Tuesday, December 15, 2020. THE CANADIAN PRESS/Nathan Denette

The provincial government says it has received tens of thousands of applications for financial assistance one week after opening a portal for promised small business grants.

The province said Friday that some 42,000 small businesses have already applied since the portal opened on January 15, including 10,000 applicants on the first day.

Ontario Finance Minister Peter Bethlenfalvy said at a news conference Friday that the government is working to make sure the money flows at “light speed.”

“We hope to get the money in the hands of those businesses that successfully applied on Friday within days from now,” Bethlenfalvy said. “So the turnaround time is unprecedented, light speed for government.”

Businesses that have been approved can expect to receive the funds within about 10 business days, the government said.

The program provides between $10,000 and $20,000 for small businesses that have been required to close or significantly restrict services under the provincewide shutdown.

Businesses that received the funding are able to use it however they see fit, such as paying employees or making rent.

The grant is open to businesses that were required to shut down on December 26, which have fewer than 100 employees and have experienced at least a 20 per cent revenue drop comparing April 2020 to April 2019. Business established after April 2019 are also able to apply.

The Ontario Small Business Support Grant comes in addition to assistance with fixed costs such as property tax, hydro costs and PPE.

Bethlenfalvy did not say whether the government will increase support for businesses if the lockdown is extended.

Bethlenfalvy, who is in his first month on the job since taking over from ousted former finance minister Rod Phillips, also answered questions on a range of other possible supports for workers and businesses.

Asked about the hot-button issue of paid sick days for those who have to isolate or who have tested positive for COVID-19, he reiterated the government position that there is a federal program in place already.

“I think the question is really there is a federal program,” he said. “I’ve had conversations with Chrystia Freeland on this, I know the premiers have raised that as well. It's a program that will give up to two weeks, 10 days of sick paid leave. We want to encourage people to get tested to take the test and if they test positive go to our isolation centres.”

There's been a growing chorus of calls from public health officials, unions, the opposition and other groups for the province to do more to provide paid sick benefits for workers who have to stay home, with many arguing that it is unfair to make people choose between isolating and going to work so they can pay their rent.

He also did not say whether he would make a pay bump introduced for personal support workers last year permanent, but said he’ll “be listening” to people across the province as part of the budget process.

Asked whether the province plans to eventually raise taxes in order to climb out of the fiscal hole punched in the economy by the pandemic, he said the government is looking at options for economic recovery, but does not favour tax increases.

“As we as we consult on the budget, there's a bunch of things we'll look at, but historically, that's not what we've done,” Bethlenfalvy said, referring to his party.

However he said at the moment the government is still focused on managing the crisis.

“Long term, the budget deficits are neither sustainable or desirable. I'm well aware of that. But right now, we're focused on making sure that we protect lives,” Bethlenfalvy said.

He said that while he is hopeful that Ontario has the ingenuity and resources to come back stronger, the province can only begin to do so once the pandemic has come under control.

Jacob Gawrysiak puts a shoe on a mannequin as key messages are displayed in store fronts of select small business pleading for action to support local businesses during the COVID-19 pandemic in Toronto on Tuesday, December 15, 2020. THE CANADIAN PRESS/Nathan Denette