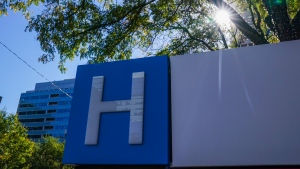 The entrance sign to the Mount Sinai Hospital in Toronto on Tuesday, October 19, 2021. THE CANADIAN PRESS/Evan Buhler

The Ontario Hospital Association, along with other stakeholder groups, shared its position Thursday in a letter responding to Premier Doug Ford's request for input on a possible mandatory vaccination policy for hospital workers.

The province has so far only required hospital workers to get vaccinated or regularly get tested for the virus, though many hospitals have introduced stricter policies.

In its letter, the hospital association said the vaccine-or-test policy resulted in some improvement but argued more must be done.

“Local, voluntarily implemented mandatory vaccination is proving to be an effective way to further increase the rate of health-care worker vaccination. But it is not enough,” the letter from CEO Anthony Dale and board of directors chair Sarah Downey said.

They called for a “consistent provincial policy covering all, not just some, Ontario hospitals.”

“It will make all Ontario's hospitals safer for patients and health-care workers and reduce the risk that the COVID-19 pandemic is prolonged any further.”

The association noted that 70 per cent of its member hospitals have already gone beyond the provincial minimum standard and are now requiring all workers get vaccinated. Since those policies were implemented, the association said the number of hospitals reporting a vaccination rate of 90 per cent or higher has doubled, based on recent surveys.

The association is recommending a directive that would give employers the flexibility to address implementation issues, like timing and consequences for unvaccinated employees.

Flexibility in timing would ensure stability of hospital services as a potential policy takes effect, it said.

It also argued that losing staff from mandatory vaccination policies is easier to manage than losing staff from a COVID-19 outbreak, because the hospital can plan ahead for policy-related staff losses. Outbreak-related staff shortages are more disruptive and unpredictable, the association argued, and put immunocompromised and other vulnerable patients at risk.

The letter also referenced “deepening concern” from health-care workers about the risks of working closely with unvaccinated colleagues.

“Health-care workers are threatening to leave if we cannot protect them. These are the unheard voices in this debate that deserve to be listened to,” it said.

For those hospital employers that have already required employees be fully vaccinated, the association said the impact on staffing is minimal, with between one and two per cent of staff not in compliance.

The association's letter also made reference to the province's recent decision to require all long-term care workers to be vaccinated.

It argued that should be extended to all health-care workers because one-third of hospitals also manage long-term care homes, and some workers work in both settings, and the inconsistency can “breed confusion and further vaccine hesitancy.”

This week, the province's COVID-19 science advisory group also shared its recommendations to Ford on the mandatory vaccination policy.

A major union representing registered nurses, however, told Ford that it doesn't support mandatory vaccinations for hospital workers because of the dire worker shortage in the health field.

“For hospitals to terminate registered nurses and other health care professionals who are not vaccinated when there is a reasonable alternative will exacerbate an already tenuous situation on the cusp of a catastrophic staffing crisis,” her letter said.

“This will inevitably impact the provision of health care to Ontarians - at a time when there remains a lengthy backlog of procedures and surgeries and tests arising from the pandemic.”

Two other unions representing health-care workers responded to Ford's query by calling on him to focus on other major factors like low wages contributing to the province's health worker shortage.

“Ontario does not have to wait for the implications of a vaccine mandate to experience a health human resource crisis. The crisis exists now,” SEIU Healthcare president Sharleen Stewart said in a statement with the Ontario Council of Hospital Unions.

“More healthcare workers are leaving the system because of poor wages and working conditions than because of vaccine mandates.”

Health Minister Christine Elliott said in the legislature Thursday that the government is collating the responses to Ford's letter and would make a decision soon. She said job losses of unvaccinated workers are of particular concern in rural and northern areas, and the province is taking that into consideration.