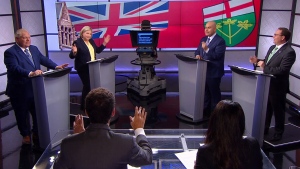 The televised leaders debate came and went on Monday night without a big headline moment.

The topics were predictable – affordability, health care and education. The leaders were prepped and ready. For a change the format and the moderators even didn’t get in the way too much.

But its impact on the campaign isn’t likely to be felt widely. The session didn’t manage to make the front page of the Globe and Mail. The editors pushed its report back to page six. The Toronto Star went with the front page headline “Trading Blows” while the Toronto Sun moved its debate story to page five. Meanwhile, on the front page of the National Post the verdict was that PC Leader Doug Ford emerged “unscathed.” Most of the post debate reporting agreed that Ford won because those “blows” the Star headlined were definitely not hard hitting.

Ford stayed calm and on script for the full 90 minutes. He continued to toss out billions and billions of dollars of promises as if it was confetti. The Ford promise is to build highways, build schools, build hospitals and the building list just goes on and on. It used to be that an Ontario Progressive Conservative would worry about how things are paid for. Not Ford. He promises to build and not raise taxes – ever. Today, the day after the debate, Ford boasted that the billions he’s promising is “staggering.”

Andrea Horwath continued to spend as much time splitting her attack lines between the Ford and Liberal Leader Steven Del Duca. Horwath tried to hit back at the Ford “build promises” campaign by making the point that Ford has cut back on teachers and social programs since 2018. She promised the NDP would hire more teachers in those schools yet to be built and more nurses in the hospitals still in the planning stages.

During the debate, Horwath used stories of the people she has met during the campaign to make her points on the need to “fix” the problems of Ontario. The time allotments for each leader in these debates are short at the best of times. These “people stories” do connect Horwath with voters but don’t zero in on the core challenge to rebut the full throated “yes” of the Tory campaign.

When it came to going after Del Duca, time and again Horwath looked for moments to take on the Liberal record reminding viewers that, like Ford’s government, past Liberal governments cut programs too. That tactic can confuse the NDP message. Horwath says she is running to be premier. But attacking Del Duca moves the spotlight off of Ford, something the PCs must be delighted with every time Horwath does it.

Minutes after the debate ended the Liberals were pushing out a graph, showing that Ontarians were googling away to find out more about Del Duca. For weeks Liberals have waited for this debate night to let Ontario see their leader in action.

The luck of the debate draw pitted Ford against Del Duca on the economy. Del Duca tried to score with a 19-point economic affordability pledge he signed in the morning. But Ford said the other three parties would raise taxes and the price of gasoline. Del Duca responded to Ford with an old line, saying that “you are entitled your own opinion but not your own facts.” But that was delivered right after a Ford zinger that the last Liberal government in Ontario destroyed the economy “faster than the Canadian bobsled team.”

And then there was Green Party Leader Mike Schreiner. His earnest passion for change came through clearly. He zeroed in on Doug Ford time and again. He called Ford’s plans “irresponsible” and told Ontarians he needs more Green members to force change in Ontario. Schreiner had the best debate of the night. He was focused on Ford, focused on attacking the policies of the Progressive Conservative government and its record over the last four years. But the Green Party is not a threat to the Tories.

As the leaders moved on to campaign across the Greater Toronto Area on Wednesday morning it seemed like nothing had changed. A confident Ford was content to keep selling his “Get it Done” slogan, Horwath was back talking about schools and education and Del Duca held an early morning rally before promising to improve the work-life balance for voters by working towards a four-day week. That left Schreiner making stops in two ridings the Greens have great hopes for - University-Rosedale and Parry Sound-Muskoka.