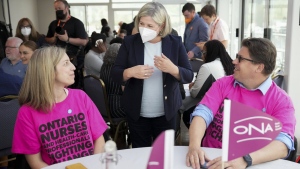 NDP leader Andrea Horwath meets with frontline workers during a campaign stop in Toronto on Friday, May 27, 2022. THE CANADIAN PRESS/Nathan Denette

TORONTO - Contract negotiations with more than one million broader public sector workers in Ontario could look different after the election, with three major parties pledging an end to wage restraint and the Progressive Conservatives promising to bargain “fairly.”

The NDP, Liberals and Greens are all pledging to repeal legislation that has capped public sector wage increases for workers such as teachers and nurses.

The Progressive Conservatives introduced the legislation in 2019 to limit compensation increases in public-sector contracts to one per cent a year. The provisions were to be in effect for three years, and the Tories said in 2019 that it was a time-limited approach to helping eliminate the deficit.

With some major contracts - such as with teachers - coming up later this year, Progressive Conservative Leader Doug Ford was asked Friday if he would commit to not bringing in any new wage restraint legislation.

“As these contracts lapse...I can tell you right now we'll sit down, negotiate fairly, and I support our front-line workers.”

But labour law expert Sara Slinn said that due to the timing of when the three-year term takes effect for each contract, some public sector workers will still be subject to wage restraint in the coming years while others won't.

“For a significant number of bargaining units in the public sector, Bill 124 is a live and ongoing issue,” said Slinn, an associate professor at Osgoode Hall Law School.

“And very problematically, because for collective agreements that are being negotiated right now, or have just concluded, etc, it's in a context where there's very significant inflation with no immediate end in sight. So that's a pretty significant, effective real cut in compensation.”

The legislation, known as Bill 124, landed in the midst of already tense bargaining with teachers, further complicating negotiations. Nurses have also decried the legislation as subjecting them to effective cuts while they are hailed as pandemic heroes.

The Progressive Conservatives offered nurses a $5,000 “retention” bonus, but nurses say it is not a replacement for a wage increase and won't help with retention.

“Bill 124 prevents nurses from freely negotiating a fair and respectful collective agreement and has driven Ontario's exhausted, traumatized nurses and health-care professionals away in large numbers,” Cathryn Hoy, president of the Ontario Nurses' Association said in a statement Friday.

“Bill 124 has worsened an already critical nursing shortage and its `retention bonus' is not the meaningful action needed to begin to permanently fix that shortage.”

“You can't pretend that these last couple of years haven't actually meant wage cuts for these working people, it has, with inflation running as high as it has been, obviously, these folks have taken cuts,” she said Friday.

“What I will do is bargain with respect and in good faith, and they haven't seen that in this province in a very long time.”

Green Party Leader Mike Schreiner has also said he would repeal the legislation.

Ontario Liberal Leader Steven Del Duca said repealing the legislation would be his top legislative priority if he is premier.

“Doug Ford chose to ram this through prior to the pandemic, which basically takes away the rights of front-line health-care workers and education workers, including nurses and PSWs, takes away their right to bargain in a free and fair and open way,” he said.

When the Progressive Conservative government introduced the legislation it said about $72 billion a year is spent on public sector compensation.

Del Duca said his Liberal plan includes about $16 billion over four years in contingency funding, which would be enough to absorb the compensation increases that would come from bargaining freely with the public sector.

“If that succeeds, that will be extremely expensive to the government,” she said.

The teachers' unions won a court challenge several years ago against the Liberal government. Legislation known as Bill 115 froze some of their wages and limited their ability to strike, and the judge ruled that the government “substantially interfered with meaningful collective bargaining.”

Ontario was left having to pay more than $100 million in remedies to the unions.

Slinn said one major difference between bills 115 and 124 is that the current one is time-limited.

NDP leader Andrea Horwath meets with frontline workers during a campaign stop in Toronto on Friday, May 27, 2022. THE CANADIAN PRESS/Nathan Denette